In the great outdoors...a hint of blue sky and sunshine after so much dreariness! Also, lots and lots of wind. Remember this picture of our trellis? 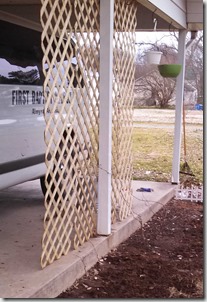 This is what one panel looked like yesterday in the 30+ mph wind. 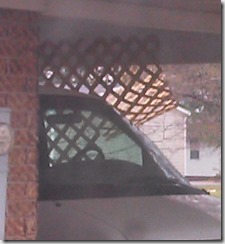 This was after we tried to fight the wind and secure the trellis. We gave up. Well, that’s not actually true. There were two panels blowing like this, and we managed to get one secure. We thought we secured this one as well, but within about fifteen minutes it was blowing again. We decided not to go back out. I could hardly keep my balance while helping Doug try to secure the thing in the first place! And yes, the wind was HOLDING the trellis up like this. It flapped higher – it never fell lower than this through the course of yesterday afternoon. Today’s not quite as bad, but still very high…and very cold. The temperatures are in the 40’s, with the wind chill still in the 30’s. Funny to think that last year most of the farmers had already done a good portion of their planting by this time and that our temperatures were already steadily in the 80’s. Ah, the south – we only know that summer will be hot. Every other season is completely unpredictable!

Within our four walls...much cackling as the children play nerts. I love hearing them play together!

A heart of thanksgiving...for God’s peace and presence that is incredibly tangible in ways I cannot even express.

A heart of prayer...for baby Preston’s family, the preemie I’ve mentioned here several times. He died yesterday. It was a tough thing to tell the kids, especially as I also had to tell them that my grandpa is not doing well either. Praying for the hearts of my children as they work through all of this.

My silly children...Steven got a riding/push toy from Doug’s parents on his first birthday. He still loves that thing even though he’s long since outgrown it. I cannot even think of giving it away. 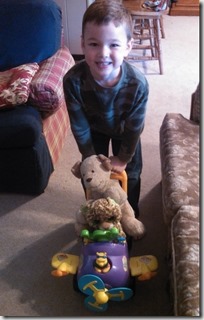 Thoughts from the kitchen...leftovers. Mac-n-cheese. Steven says there’s nothing better than mac-n-cheese, leftover or otherwise!

On my bookshelf...I’m right in the middle of Whence Came a Prince. I got ahead on reviews enough to dive in yesterday, and I’m devouring it. Oh, such a story! Such a trilogy! It’s hard to put it down to actually get some work done today! (Like I said – I don’t want to work today!)

Projects...this week I will be getting the minister’s wives blog launched. So excited! We have such a neat group of writers, and I can’t wait to see what they have to share. Over this week and next I also hope to finish the major writing project due the middle of next month, get the LAST (yippeee!!) six weeks of school prepped and planned, and finally get next year’s school planning and purchasing done. We’ll still do school through the summer, but only math, language arts, and maybe one or two other things. Then we’ll start back with a full curriculum in July.

Sounds of the moment...I’m listening back over my recording of a writer’s conference to get some quotes for my writing project. The kids’ laughter is floating to me over the sound of the recoding. I love that!

Last week we learned...that some books just cannot be read in coordination with the school schedule. They’re too good to put down! I think Seven Daughters and Seven Sons ranks as the all-time favorite Sonlight book for my mom and youngest brother and sister (the rest of us didn’t get to use Sonlight). I read it, too, as a teen, just because they loved it so much, and it has long been a favorite book of mine. I have looked forward to reading it with Olivia since I first realized this was the core that contained it. As I expected, we could not put it down. We ended up finishing it a week or two early. Some books are just like that.

A favorite thing from last week...our visit with Mom and Alli. We played and visited and played some more. Such fun!

The planner...no school this week or next to give me time to get projects and planning done. So, that’s the main force of the planner for the next couple of weeks! With Easter activities worked in, of course, and the excitement of welcoming back new episodes of Doctor Who. (Yes, we are geeks and proud of it!!) We are also moving our visit to my grandpa up from Friday to tomorrow and keeping the rest of the week flexible just in case we need to go back.

Because visuals are fun...I wish I could capture just how much Thea lights up when she sees Olivia. I love how much these two love each other! 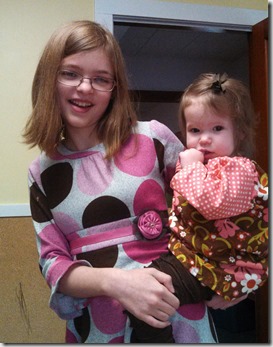 Herding Grasshoppers said…
Good gracious, that's a lot of wind! I think I'd leave the trellis to its own devices and stay inside ;D

So sad about baby Preston. May the trial draw his parents to the Lord.

I hope you'll like to the ministers' wives' blog when you get it going,

PS We're about to read 7 Daughters / 7 Sons - I'll let you know how the boys like it. They're loving Shadow Spinner :D

The Hibbard Family said…
I can't wait to hear! Seven Daughters and Seven Sons references the Shadow Spinner story several times - it's neat to read the connection.
March 25, 2013 at 3:37 PM