Last Tuesday morning, this lovely group of ladies pulled out of Almyra and headed to JoyWorks. (From left to right: Amy, Angela, Olivia, Amy’s daughter Abby, Lauren, and Karlyn.)

Amy, Abby, and Lauren do not attend our church, but we were so glad they got to combine forces to go as a group! 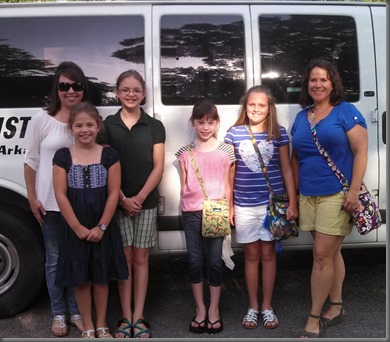 When they got to Arkadelphia, they were joined by Zoe (in the lime green shirt). To say Olivia was excited is a HUGE understatement! Zoe is a friend from art camp/classes and sewing camp. Her mom was involved in the committee that made JoyWorks, but she didn’t really have a group from her church interested in going this year. Just Zoe. So, knowing that Karlyn was taking a group from our church, she asked if she and Zoe could room with them. It worked perfectly! 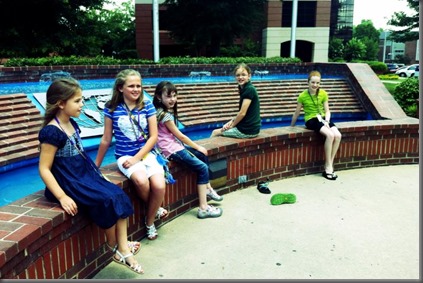 The girls didn’t call us one time during camp, but it was okay. We primarily have Facebook to thank for that! Karlyn and Amy continually posted pictures of the things the girls were doing. And, every time we posted a picture or some news from home, Karlyn would show our girls. They didn’t get homesick once! I was most amazed by Angela, but seeing her pose in this picture from the last day showed me just how comfortable she was throughout the week. There she is, not peopled out, but instead cool as a cucumber with her arms around Abby and Lauren. 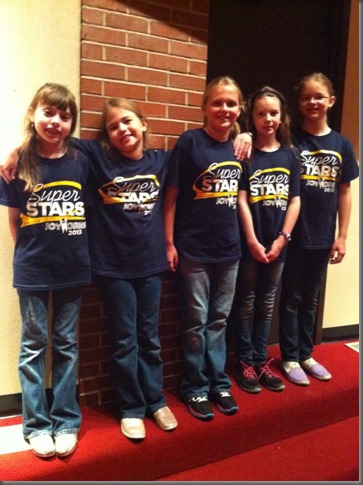 Several things contributed to the girls’ ease during the week.

On Friday, we got up early and headed down to Arkadelphia to hear their performance. Needless to say, Steven was ready! He even had Alf and Hopper (Cowie and Bunny’s “kids”) all ready to greet the girlies. 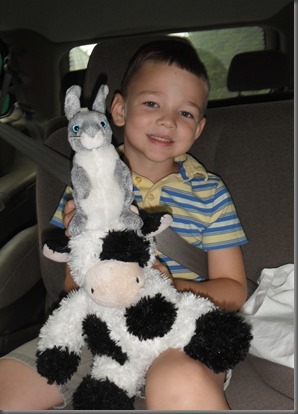 They were neatly tucked in with his Speckles and silky for the trip and the waiting. 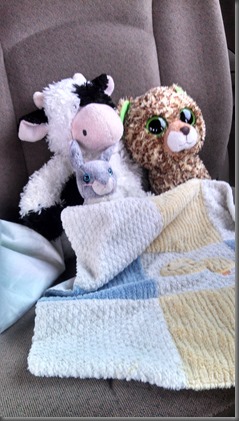 Here’s the full choir that greeted us when we arrived. Angela is in the front row on the left, and Olivia is in the middle on the right.

Can you see Angie? Front and center! 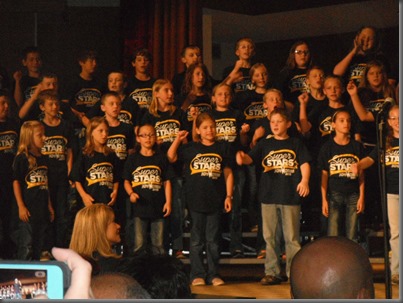 Olivia is right in the center of the frame – the only kid looking at the camera. 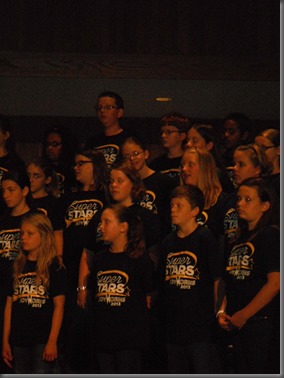 Their performance was beautiful! Those children learned so much during the week! They divided into groups and explored various accompaniment performances included body drumming, sign language (with blue lights and white gloves – really neat!), and chimes. Every group got to try every performance, but then each group was pre-assigned one performance for the finale. Olivia and Angela were in the body drumming, and they did a great job! (Oh, and their shirts glow in the dark – the theme was shining like stars!)

They also learned spiritual truths. Morning and evening worship were obviously specifically tailored to spiritual learning, but Karlyn said that even the practices were saturated with focus on Christ, worship, and working together to shine for Jesus in this world. And the girls definitely got the point. On Sunday morning, they shared with the church all they had learned. It was precious to hear them tell of the fun, the spiritual, and the highlights.

Even though the girls didn’t have time to miss us, they were delighted to be reunited with the family. 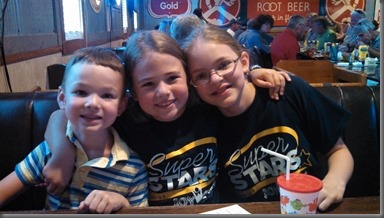 These silly three munchkins played together with their Legos for three days straight after they got home. I love how they love each other!

Thank you, Arkansas Baptist State Convention and Ouachita Baptist University for an amazing camp experience! The girls are already looking forward to next year!