In the great outdoors...the last of the snow is gone, except for the little snowmen in the front yard. We are now waiting to see if more is coming and just how much. The forecast is continually changing. In fact, in the latest alert they actually admitted that they have no idea what’s coming – anything from a non-event to really intense. They don’t even know when it’s going to start.

Within our four walls...a lot of quiet as everyone does their own thing.

A heart of thanksgiving...for the snow last weekend. For flexibility of work location. For warmth inside.

A heart of prayer...for several people I know awaiting test results. Decisions needing to be made. Stresses weighing people down.

Random observations...It’s amazing how perspective can change so much. Today’s example: Steven has always been convinced that he doesn’t like green beans. Well, I can’t really blame him, since most of what he’s tasted has been canned. So today when Doug used frozen beans for lunch, I told Steven not to think of them as green beans. I told him they wouldn’t even taste like what he thinks of as green beans. He even came up with a new name for them: crunchy beans. And, his attitude about lunch perked up immediately.

And guess what…he liked them.

My silly children...haven’t done anything specifically silly today. It’s just a matter of time, though. I’m sure of it.

Thoughts from the kitchen...in addition to the yummy green beans, we have some potluck cooking going on. Tonight is the first Blue and Gold Banquet of Steven’s Boy Scout career.

But I have to share the best thing that’s come out of our kitchen lately. Mushroom, beef, and tortellini soup. Oh. My. Goodness. 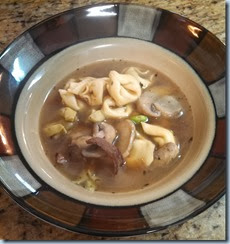 On my bookshelf...Into the Whirlwind is a review book that’s been on my shelf for a while that needs to be read and reviewed. Such a hardship to “have” to read fiction. And Angela wants me to hurry up because a new review book came in today – the brand new Janette Oke novel. Angie LOVES Janette Oke, but I have to pre-read at least one book in any series I haven’t already read, just because some of her books are a little older than Angie’s maturity level. So, naturally Angie wants me to get done with this new one very quickly so she can have at it.

Projects...nothing going on right now. I’ve needed my evenings to play catch-up over the past couple of weeks. But I’m hoping to start a new project very soon.

Sounds of the moment...soft music. The whir of the fan and computer. That’s about it. The kids are so quiet right now. (But not in a suspicious way.)

From Hibbard Academy...Steven and Angela are almost into the Reformation, and Olivia is still in the Middle Ages. That’s what is exciting them all the most right now. We’re such history nerds! Olivia is also heading back into research paper time. But this time she actually enjoys writing for the first time in her life. So, I’m excited to see what will come of this research paper.

A favorite thing from last week...SNOW! 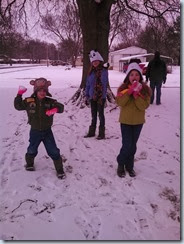 The planner...the Blue & Gold Banquet tonight, unless the weather turns suddenly in the next few hours. Doug is heading to the local food pantry tomorrow and Thursday to participate in our church’s volunteer month, and he is probably taking Olivia with him Thursday. Other than that, it’s a nice, normal week.

Because visuals are fun...Steven decided to hide under the table and play the other day. I guess that should have gone under the “silly kids” category. 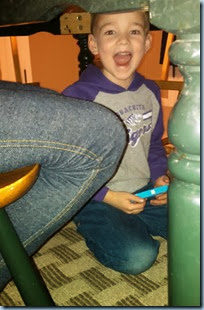 Herding Grasshoppers said…
Oh, Ann, your soup looks delicious! (And suddenly I'm craving stroganoff ;D ) Hope you get some more snow to play in - must be pretty rare in your neck of the woods!