In the great outdoors...bright, sunshiny day

Within our four walls...silly children; a slightly sluggish morning, so chores are running late; even more silliness

A heart of thanksgiving...for a husband who truly knows me; for a God who uses me even when I don’t feel very usable and would rather just hide in a cave; for cheerful sunshine

A heart of prayer...for my family and their growth this week; for my church family and coworkers and their many needs; for our wisdom.

Random observations...I should probably edit this. There’s no telling what kind of typos I’ve made! But, it’s closing in on school time. So, today you get the raw deal!

My silly children...can turn anything into something goofy.

Thoughts from the kitchen...it’s Angie’s day to cook. I think she’s using leftovers. And no, the February meal plan did not get done last weekend. Maybe this week?

On my bookshelf...same books as last week, with a little progress made. It used to be that I only read when I knew I had time to read. I’ve learned that I’m never going to have the time I think I need. So, I just need to always have two books going – one fiction and one non-fiction. No matter how long it takes to read them!

Projects...still haven’t gotten back to the organization project. So, that’s the main thing on the list right now.

But, we did get another project done over the weekend that truly needed to be taken care of. It was worth postponing the organization another week. We got the fruit trees and grape vines pruned. Yay! We also moved the apple trees into the backyard. They were on the neighboring property, but the spray from the field across the highway drifted too much. We don’t know if they’ll survive the transplant, and we also don’t really know what of what is left is the actually tree we wanted or just the root stock the tree had been grafted into. So, we don’t know what to expect if they do survive! I suppose we’ll find out over the next couple of years! The grape vines greatly surprised us after their late-in-the-season transplant last year. Maybe the apple trees will too.

Sounds of the moment...dishes clanking occasionally as they get put away. Tapping keyboards.

From Hibbard Academy...lots of grading to catch up on. We’ve gotten behind with the craziness of the last few weeks. But, catching up on read-alouds is much more fun!!

A favorite thing from last week...Olivia’s greatest excitement from her weekend at a youth event was knowing that a girl she knew got saved.

The planner...I was supposed to do a couple of things this weekend. I ended up backing out. Just too socially maxed out. And it will give me a chance to be home and to catch up a bit on school and life.

Because visuals are fun...Olivia’s first issue of Dear Magazine arrived while she was gone. The bunnies tried to protect it for her. At first, it worked. Angie didn’t seem interested in it at all. But, Sunday morning, Angie decided to pick it up and flip through it. Then it was all over. She wouldn’t let go of it until she’d read every single page! 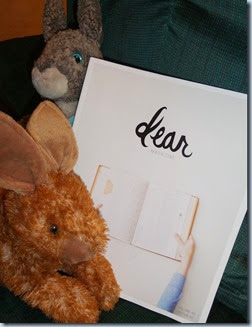 Herding Grasshoppers said…
Hurray for pruning, but catching up on read-alouds is more fun :D
February 12, 2015 at 1:08 PM