In the great outdoors...a little bit more ice, but none of the snow we were hoping for. Schools are in session, and the sun is shining. They still say snow is possible today. We’ll see.

Later…well the snow started late morning. It was pretty. But, it was icy! Schools let out early and we cancelled our evening activities.

Within our four walls...business as usual for the day. Trying to get a good start on the new week.

Later…getting kids to bed while Doug and I finish up a few things this evening.

A heart of thanksgiving...for the blessing of an unstructured weekend.

A heart of prayer...for those out in the cold today; for new issues facing the Choates; for energy to move effectively through this week.

Random observations...I started this post at 8:30 this morning. I’m finishing it at 7:30 tonight. It’s kind of fun to see how the evening is different from the morning.

Thoughts from the kitchen...Doug fixed a variation on shepherd’s pie for lunch. It was yummy.

On my bookshelf...reviewing a student edition of one of Lee Strobel’s books. I think Olivia will enjoy reading it – her brain works that way.

Projects...get the planner filled out for the week so I’m not blundering around. I’m kind of blundering right now, not sure where to start. I don’t like to be enslaved to the planner, but it is definitely helpful when it – not random urgency – is my boss for the week.

Sounds of the moment...If I say I can picture Star-Lord dancing around an abandoned planet, can you determine the moment’s sounds? Oh, and there’s a vacuum cleaner in the background.

Later…Robert Irvine’s voice in the background as I type and work on bulletins for next week. Restaurant: Impossible makes for fun background noise.

From Hibbard Academy...a somewhat light week as Olivia is between math books (she’ll start the new one after next week’s break), we somehow got ahead on read-alouds, and we expected to have a couple of odd days that we now probably won’t have. So, there will be some catching up on grading to take advantage of the light schedule.

Later…Olivia actually decided she didn’t want to wait to start her new math book. She was actually doing extra pre-algebra lessons for the fun of it BEFORE school started this morning! What a contrast from the child who used to hate math with a passion.

A favorite thing from last week...flexibility to enjoy Saturday as we pleased. It was nice to be relaxed and even a little crazy.

The planner...a mostly normal week. We were supposed to have Scouts and Bible study tonight, but the ice prevented that.

Because visuals are fun...I discovered today that Olivia and Angela’s legs are the same length! Olivia’s torso is just that much longer. Wow! 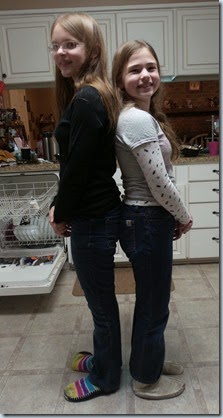