In the great outdoors...fall. It cooled off over the weekend. And I mean REALLY cooled off. Lows in the lower 40’s, highs barely into the 70’s. Delightful! Especially after hitting a record 98˚ last Thursday. (Previous record was 94˚.)

But, it’s also very, very dry right now. Even when it hit 98˚, we didn’t close our windows because it felt much more like a Jordanian heat (we had no A/C there) than a typical, humid Arkansas heat. The house got warm, but not unbearable. And none of us wanted to give up the fresh air.

Within our four walls...routine. Chores being done by the children. Mama preparing for the day. Daddy off to work. We might actually have a whole week of routine! What’s that?

A heart of thanksgiving...my hives are staying off my hands and feet, even when they get really cold! I was not looking forward to dealing with itchy cold hands and feet this winter, but it looks like I might be able to escape that. My legs still get itchy from a combination of hives and dry skin, but that’s so much easier to deal with than hands and feet. Yay! Thank you, Lord!

A heart of prayer...for baby Elijah and two others from our church in Children’s Hospital. We’re so thankful for Children’s, but we’d really rather not have to use it. That’s just not fun, folks. In addition to Elijah, there’s another baby with some type of infection, and a young man whose appendix didn’t just rupture – it truly burst. Yuck.

Also, always for East End Baptist and FBC Almyra. Oh how my heart longs to see God glorified incredibly through both churches!

For work. Oh, how I love my job, but that doesn’t keep it from truly being work. Deadlines, mental challenges, and problems to solve. That’s just the nature of it!

And for rain. It’s so dry that our grass is crunchy. We haven’t needed a mow in forever. But leaves are falling, too. Which means people are going to burn no matter how serious the county is about the burn ban.

In all honesty, there’s a lot more on my heart. But, I’ve been rather unfaithful about praying through them all. So, this week I hunger to discipline my heart and mind more faithfully to be fully surrendered in prayer.

Random observations...a new outlet mall opened near us. Very near us. We almost never go to a store on opening day (something about not liking crowds). But, I had a doctor’s appointment Friday morning, and when driving back home (right by the new mall), it was obvious that it was busy, but not crazy yet. So, we went.

Yeah…it’s really not safe to have an Auntie Anne’s and Kitchen Collection that close to our house.

More helpful, though, is the VF. Brand new pants for thrift store prices? Yes, please! Especially for my growing boy! After all, they were on the list. And the Old Navy, since Angie and I are both hard to fit when it comes to jeans, and Old Navy fits us both perfectly. I hate to pay for brand name clothes, but we’ve just learned that sometimes we have to look for what works. Fortunately, the outlets usually have better prices.

It started really getting congested around lunch time as we were leaving, and by Friday evening, traffic was horrific in that area. Which will be significant as we approach the Christmas shopping season, because the mall is right on our main driving route.

My silly children...are all bundled up this morning. But they like being cold as much as I do. They like bundling up. It’s fun!

Thoughts from the kitchen...soup, soup, and more soup. We had soup twice on Saturday and again for lunch yesterday. We’ll probably have another kind of soup today. Then it will warm up again, so we’ll defer for a few days. But, it will come back this weekend. I’m so excited!

On my bookshelf...same stuff. Yep, I’m just slow. Well, I did actually finish Tricia Goyer’s Spanish Civil War series. Doug and I have been waiting until we’re both in a gap before reading Patrick W. Carr’s e-book together, so hopefully we’ll get to read that together at least one or two evenings this week. We just want to get it done before book one in his new series comes out!

Projects...Christmas time is coming! And at least one child does read the blog. So, no hints on the projects I’m planning. I am almost done with Steven’s second sock. Poor child will be able to have both feet warm!

Sounds of the moment...the broom brushing across the dining room floor.

From Hibbard Academy...maybe a full week of school? Maybe? Hopefully? I don’t know how long it’s been since we’ve managed a full five-day school week. While we do have the flexibility, we’re using a lot of it up in the first semester. Second semester is going to get LOOOONG if we don’t save up some break time. So, I’m hoping we’ll be able to get in a lot more five-day weeks between now and Christmas.

A favorite thing from last week...no evening meetings for Doug. We’d gone through a week and a half of him having something every night. One night it was 10:45 before he got home. It was nice to have him home in the evenings last week!

The planner...a pretty normal week. School and work, Scouts and AHG tonight, church Wed, date night Fri, then Doug’s parents come up this weekend. We’re taking a Hibbard family trip to Little Rock’s dinner theater to see Arsenic and Old Lace. It’s a particular favorite for the whole family, so when we found out it was coming back to Murry’s, we just had to plan a trip!

Because visuals are fun...I’m not a selfie kind of gal (I always end up with a strange expression from trying to concentrate on taking the picture), but HEDUA’s social media guru asked for selfies of staff and kids. So, I snapped this one. How did I end up with such cute kids?!?! 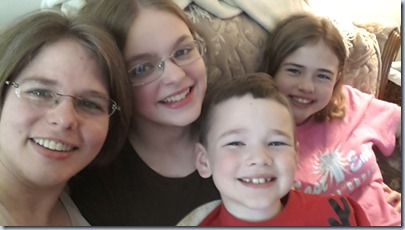 Herding Grasshoppers said…
Hurray for a week of routine - I'm WITH you :D
And ouch for your friend whose appendix burst. When Tate's ruptured, he spend nine days in the hospital... no fun!
Love your smiling selfie :D
julie
October 19, 2015 at 11:51 AM