Skip to main content
Labels
Posted by The Hibbard Family May 25, 2016

Toward the end of April, a note was written on our refrigerator white board. It was a countdown…

I took a picture, or so I thought, but now I can’t find it. But, yes, it was there. Then, on departure day, the countdown was replaced with “Bye-Bye! (Poor little Smokey Cat).” 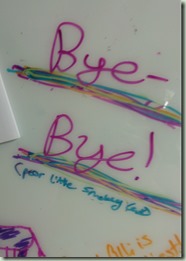 Can you tell there was a wee bit of excitement about this trip?

The first bit of the journey was, well, not exceedingly scenic. There’s not much 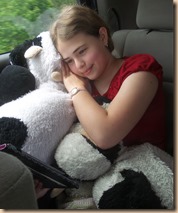 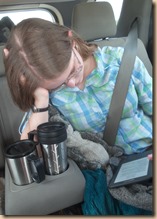 excitement between Little Rock and Memphis. So, it didn’t take long for the stuffies and Kindles to come out. Once we got past Memphis, though, and were heading across northern Mississippi, it was a different story. There was something about those rolling hills and the farmland that immediately started bringing the refreshment so greatly needed on a trip like this. It was delightfully perfect. The Kindles did come and go throughout the drive, but it was such a beautiful morning to be on the road. 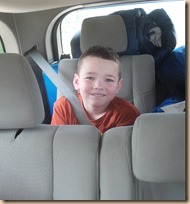 Our first stop of the trip was Shiloh National Military Park in southern Tennessee. Because we’re nerds. And we like history. And that’s just cool stuff! We started at the visitor center, and of course we HAD to 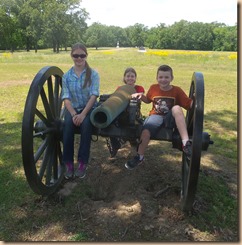 visit the bookstore as well. Then we started the driving tour of the battlefield. I didn’t take very many pictures because we were truly taking it all in.

The neat thing about Shiloh is that it has naturally maintained what some parks are trying to return to. It has remained much like it was when the battle occurred. Forests, clearings, and fields are in pretty much the same place. The log cabins and such are gone (except for the tiny log church for which the battle was named – I missed getting a picture of that, too), but even the roads we drove on were paved right over the wagon trails that existed 150 years ago. Smoother travel, but right in the same place.

So, while my silly kids could safely perch on the replica cannons without worry of being caught up in battle, it 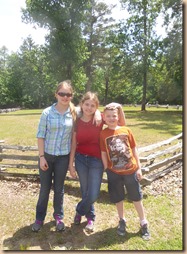 was easy to picture troops being surprised by a cannon as they emerged from the woods into a clearing, or soldiers having to fight their way across a ravine or through underbrush just to make progress. Even the peach orchard destroyed by the battle way back then is still a peach orchard today. It was sobering to think of such devastation in such a beautiful place.

As we drove along, we saw a fun sign indicating a bald eagle nesting site! Sure enough, we quickly found the nest. In the clump of trees behind the kids, the enormous nest is directly above Angie’s head. We didn’t see the birds themselves – I assume they were out hunting at the time. But we did find a feather that was clearly an eagle feather. The shaft was quite huge, and even the downy portion at the base of the feather outsized many small bird feathers. 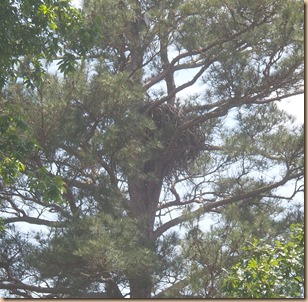 By the time we finally pulled out of the battlefield park, it was well past lunch time. Doug had scouted eating locations a couple of weeks before, and he found a place called Hagy’s Catfish Hotel just outside the park. 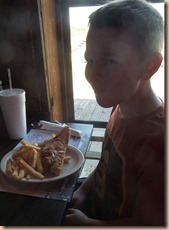 Now, you have to keep in mind that when we left Almyra, we left the catfish masters. We weren’t even big fans of catfish until our years there. And, while other places and people can definitely put on a decent fish fry, it takes a lot – an awful lot – to match the Yoder Ruritan fish fry masters. That’s not a criticism of other places and people. That’s just an indication that the Almyra crew is that good.

But, all indications pointed to the Catfish Hotel being a top-notch fish source. So, we thought we’d give this historic establishment a try. Steven’s grin is a little hard to see because there were spots on my lens and he was sitting by the window. But, that’s a very, very, very happy smile on that boy’s face. A VERY happy smile. It only took a bite to prove that the Catfish Hotel’s long-standing reputation was legitimately earned. 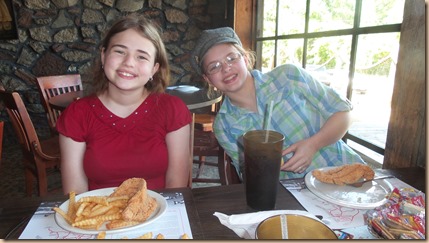 Full and happy, we left the Shiloh area and headed on toward our final destination – a cabin on Tims Ford Lake in south central Tennessee. But I’ll save that for Part 2.