Skip to main content
Labels
Posted by The Hibbard Family May 03, 2016

In the great outdoors...very chilly for the first week of May. We were supposed to get up to 74° today. I don’t think we made it out of the 60s.

Within our four walls...fresh air clearing out the stale – even if that does mean needing to pull a sweatshirt out as the sun goes down! I love this long spring.

A heart of thanksgiving...for Choffy. Yep, I’m simple-minded at the moment.

Okay, so it goes a little deeper than that. I’m thankful for easy access to the Word of God. SUCH easy access. I take it for granted so often. But, the truth is that I can’t imagine not having it at my fingertips. Someday I might not – I want to get it into my heart and head now, before that day comes.

Thoughts from the kitchen...another new recipe today – fajita southwest dinner. Essentially, a bean and rice crockpot dish. Once again, we added meat. But, it was another winner! Amazing what slightly different flavors can do to a menu plan. We only got four or five new “winner” recipes from last month’s plan, but one was an oriental dish. That’s worth its weight in gold at our house! Then, of course, there was the hot and sour broth that we can no longer buy. We’ll see what we get this month.

On my bookshelf...a review book I didn’t recall requesting, but it looks intriguing. The End of Law by Therese Down – a WWII novel. I’m about to go grab a blanket and curl up in the bean bag to get it started.

Projects...I finally thought of something to sew for the kids, so I’m going to try to get that done in the next couple of weeks. But, since the kids might see this post, I can’t say what it is yet.

Sounds of the moment...crickets and sirens. There are SO many sirens here!

From Hibbard Academy...Steven and I just finished reading All Sail Set together. The girls and I didn’t even finish it when they went through this core. Too much sailor jargon. Steven, on the other hand, ate it up!!! Right up his alley. He’s been reading Hornblower books lately, as we can get them from the library. Those are now on his list of books he wants to own.

Other than that, Steven and I are learning about birds in science, while Angie’s exploring basic anatomy. Olivia is continuing to push her way through physical science, and is currently finishing up a unit on sound waves.

In history Steven is learning about the pre-Civil War tensions, Angela is in ancient Greece, and Olivia’s finishing up World War II. Once upon a time, I kept them all pretty much together. But, they have such varied approaches to learning that it’s actually easier right now to let them go their own directions. When we first divided the three kiddos up into different cores, I wasn’t sure how well it would work. But, it’s been relatively easy and has proven to be a good choice.

What’s most exciting, though, is that we have an end in sight! I’d originally hoped to be done by the end of next week, but that’s not going to happen. We’ll have about a week and a half of no school between the 16th and the end of the month, then we’ll be pretty much done by June 2. Olivia will still have some science and math to finish, but that’s about it. Yay!

A favorite thing from last week...a Saturday at home. We had plans, but bad weather changed those plans. Even though everything had cleared up by Saturday, the high water left behind changed things up.

The planner...a normal week, for the most part, except for a Saturday field trip.

Because visuals are fun...birds are apparently fond of our porches. The girls found this nest with three or four little eggs in mid-April, then noticed about two weeks ago that the eggs had hatched. 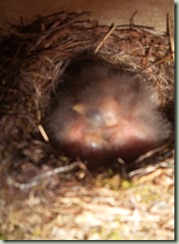 The nest is located just above the light on our front porch. So, we have a TON of bird droppings all over the front entryway. 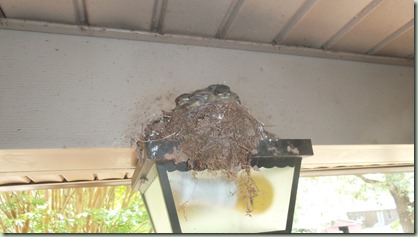 But, the baby birdies have grown a lot in the last two weeks, and I expect they will outgrow the next very, very soon. We still can’t tell if there are only three or if there’s a fourth in the back. 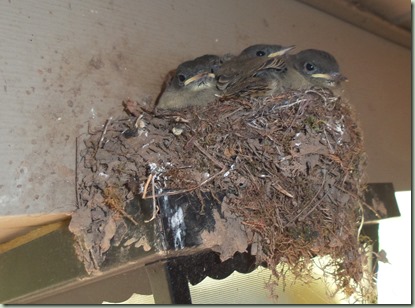 Meanwhile, there’s another nest on our back porch – right in the middle of all of our cans of insect spray and WD-40, of all places! 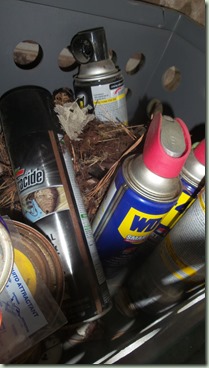 None of us have seen the birds yet, but Steven has heard them almost daily. 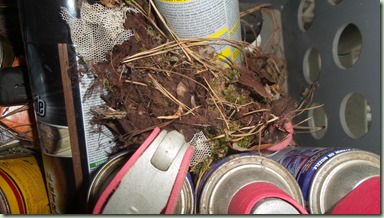 Herding Grasshoppers said…
Hurray, you're back to blogging :D

I'm so with you on the fresh air. I don't mind putting an extra layer on, or an extra quilt on the bed, just open those windows!

I'm curious what you're going to sew for the kids. Fun secrets!

And OH YES WHEN WILL THIS SCHOOL YEAR END? We're a week "behind" because we took a week off to camp with Naomi last fall. Not a problem, we can do what we like :D But we're so anxious to be done! I think Gunnar is just a little bit ahead of Olivia - we just finished sound waves a week or two ago. Pushing through four experiments today, before he babysits this afternoon.

Happy Mother's Day to you!

The Hibbard Family said…
I really want to be back to blogging a LOT more!!! :)

Olivia's a little behind on science - she won't be done by the time she's done with everything else. But, that's okay! Just a subject or two during the summer won't hurt!