Skip to main content
Labels
Posted by The Hibbard Family May 31, 2016

In the great outdoors...cloudy and humid. Lots of rain over the past couple of days and more expected this week. Windows are still open this morning because the temps are comfortable, but it’s very sticky.

Within our four walls...getting back into routine after a long weekend. Everyone is quietly and diligently working on their own tasks.

A heart of thanksgiving...for sweet visits over the weekend with my parents and with dear friends.

A heart of prayer...for believers across our nation to learn what it really means to live their faith, and for our churches to become effective as a result.

Random observations...I thought I had a “before” picture from last fall, but I guess I don’t. So, you just get the afters.

I was so excited to find hydrangeas when we moved in last summer. While I’m not a flower person (I like fruiting plants, but I usually tend to kill everything else), there are two flowers I’ve always loved: black irises and hydrangeas. So, I’ve long wanted to at least try to grow hydrangeas in my yard.

Anyway, when we moved in, I thought there were two bushes, but they were so overgrown and covered in weeds and vines that it was hard to tell what was what. Back in October or November, we chopped the bushes down to almost nothing just to get them under control. As we chopped, we discovered that there were actually four bushes, just that two of them had been pretty much drowned by their neighbors.

The biggest one was so full of dead branches that it was downright ugly. Although it didn’t flower this year, it definitely is thriving now that the dead branches are gone! This fall I’ll be able to properly trim it, and it should flower beautifully next year. The one right beside it was practically invisible last year. Because it was so small already, dwarfed by its neighbor, it didn’t have to be chopped quite as much. But that still didn’t leave much after I was done. But look at it now! This year, now that they each have their own spots, this one is as big as the neighbor that enveloped it last year. And look at all of those flowers! I’m just amazed at how this once tiny bush is now thriving. 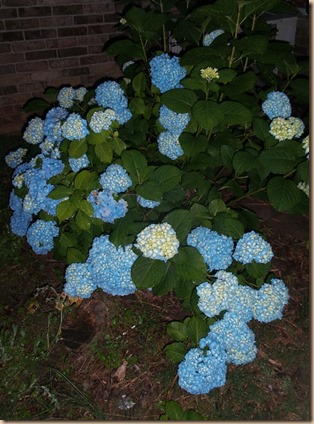 The other two were accidentally partially sprayed with Round-Up this year when they were mistaken for some of the neighboring weeds. So, they aren’t growing quite as well. But, they were also chopped even more than these two because they had vines growing all up through them. I look forward to seeing them next year!

So many thoughts are running through my brain as I contemplate this. There’s a lot to learn from this whole experience.

My silly children...are struggling with focus as they get back to routine today, especially knowing there are just three days left. But, they’re handling it SO well! Even as they get silly and distracted, they are easily reigned back in. I’m proud of the way they’ve all three trained themselves to identify the days of struggle and understand the best ways to help themselves refocus without constant nagging from Mom. Not to say I don’t have to remind them at times, but it’s definitely not a constant battle.

Thoughts from the kitchen...lots of leftovers this week. As we sat down to work on the June menu plan last weekend, we realized just how many frozen meals we had in the deep freezer. We frequently eat half of a recipe, so the second half gets frozen. If we’re not intentional to eat the frozen meals, they add up. So, this week will be an attempt to eat at least a few of them before going grocery shopping this weekend to start on our new month’s meal plan!

Projects...placing orders for the upcoming school year so I can start planning; working out a schedule and plan of attack for our summer.

Sounds of the moment...Olivia working through her last German lesson for this school year. Someone on the piano. The tunes I’m hearing indicate it’s probably Angela.

From Hibbard Academy...our last week! Some things are already finished. Angie and Steven have finished history, readers, and read-alouds. Olivia has finished literature and pretty much finished speech (she still has to give her last speech, but the final draft is done, so it’s just a matter of making sure she has it ready to present). I honestly didn’t believe we’d make it, especially so early in June. I’m proud of my kiddos and their hard work!

A favorite thing from last week...a smooth transition from vacation back to routine, but also celebrating my sweet fifteen-year-old. We’re not a big party kind of family, so we rarely have “real” birthday parties. But, we do enjoy celebrating together.

The planner...finishing school, normal church activities, graduation ceremony for the local homeschool group, and probably mowing the yard if we can get it dried out enough.

Because visuals are fun...James the Big Cow was excited to get a bit of fresh air while we were on the road yesterday. 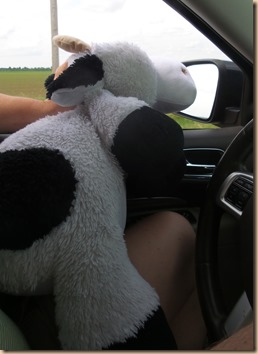 Herding Grasshoppers said…
It's not just the kids... I have a hard time getting back in the groove too! But we're doing it. So close to summer break!

LOVE your hydrangeas. The deer must love mine. I'd better get the stinky spray out...