Skip to main content
Labels
Posted by The Hibbard Family May 23, 2016

In the great outdoors...partly cloudy skies and temperatures hovering in the low seventies. I’ll take it as long as I can get it! Meanwhile, the trees and vines are growing nicely, but we’ll probably have to water soon if we don’t get rain this week. (The strawberry plants, meanwhile, are growing well, but the birds are eating all of the berries. Netting will be added soon!) We were supposed to get rain last week, but I’m glad we didn’t. If it had rained, we would have had to mow as soon as we got back from vacation, and I REALLY did not look forward to that. I suppose that will need to go on the to-do list for this coming weekend, though.

Within our four walls...fresh air coming in through open windows – but probably not for much longer. It’s supposed to get warm this week.

A heart of thanksgiving...for a great and much-needed week away with the family last week. Oh, and e-mail from Joanna this morning! The Choates had been without connectivity – even their local radio communication – for a little over a week. They got new equipment yesterday, and it was delightful to have an inbox full of e-mails and blog posts from Joanna this morning!

A heart of prayer...for our family as we get back into normal routine; for multiple people we know who are dealing with terminal illnesses.

Random observations...I like it when we feel like home is truly home after being away. Several places we’ve lived have not really been “home.” They’ve just been current residences. And, in all honesty, it has taken a while for Little Rock and this house to feel like home – possibly because Almyra had the strongest home feeling of any place we’d ever lived and still holds a special spot in our hearts. No matter how confident we were that it was obedient to leave, it was still hard to make the transition.

But, when we returned here after a week away, we walked in and truly felt like we were home. It was the affirmation we needed as we close out our first year here.

My silly children...all had very specific things they were glad to return to after our vacation. Steven went straight to his Legos, Angie to her quiet place with knitting and reading (she had her books and knitting on vacation, but not her solitary spot), and Olivia to her writing. I love their individual personalities!

Thoughts from the kitchen...time for the post-vacation cleanse! Although, I must say, we didn’t eat too badly while we were away. We had a cabin, and unless we were out and about during mealtime, we cooked there in the cabin kitchen. That was nice.

On my bookshelf...finally getting around to reading That Hideous Strength, book 3 in CS Lewis’ Space Trilogy. I started the series years ago and enjoyed the first book, but the second one was rather bizarre for my brain (although it is Olivia’s favorite of the series). So, I never came back to the third one, despite Doug’s assurances that I would like it. I’m determined to remedy that over the next couple of weeks before my next review book comes in. It has taken me a little while to get back into Lewis’ writing style for this series, but I’m enjoying the book so far.

Projects...I think I’m ready to do a little “rebranding” (for lack of a better term) on annhibbard.com. The design has definitely been in need of a rework, and I’d like the whole blog to be a little more coherent. So, that’s one of my summer projects. Well, in between all of the other summer busyness facing us with trips, camps, church plans, and prep for the new school year! I did a little design tweaking yesterday, but I hope to really flesh it all out over the summer. Meanwhile, I’ll freshen up this blog a bit as well. It’s been a while since I’ve done anything with the design on here, too. Ah, how things change. I used to update the design every season!

Meanwhile, I have sewing projects and planning for the new school year. I’ll definitely stay busy this summer!

Sounds of the moment...Angie practicing piano. She’s doing well for having been away from it for a week.

From Hibbard Academy...after a week off, we’re ready for our nice, “long,” three-day week! Ha! Olivia’s birthday is on Thursday, so with Memorial Day next Monday, we’ll end up with a really long weekend. Then, three more days next week to wrap up the school year (although Olivia will have a bit more to finish up). In all honesty, I much prefer a year-round schedule with more breaks scattered throughout the year. But, the past few summers have just not lended themselves to that. So, we’ll enjoy a two-month break – at least a break from the school work. It will still be a packed schedule!

A favorite thing from last week...the cabin. Oh my, the cabin. It was our back-up plan, in all honesty. A few other plans fell through, and it looked like our vacation was going to be chopped to almost nothing. Then, we found the cabin that would allow more nights at the same price. Once we got there, we realized that, while it might have been our backup, it was God’s number one plan. It was exactly what we needed, and it provided a perfectly relaxed framework for our activities. And yes, I have pictures transferred to the computer and selected for posts. Blogging about the week WILL happen!

The planner...mostly normal this week, except for Olivia’s birthday! Yay for birthdays!

Because visuals are fun...what does the Hibbard family do to finish out a vacation week? Stop at a bookstore, of course! 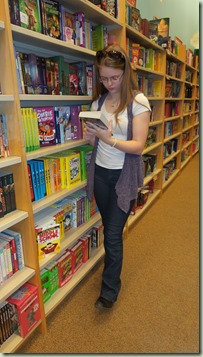