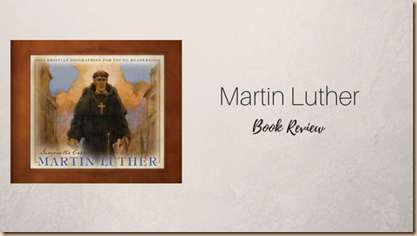 Several years ago, we discovered Simonetta Carr's Christian Biographies for Young Readers series. These mini biographies are beautiful, appealing to children of all ages (and their parents, too!), and quite varied in the individuals covered - including both well known and not so well known names.

The most recent addition to the series is Martin Luther, who obviously fits into the "well known" category. But, our history books often gloss over the biography of this influential man. Simonetta Carr digs just a little deeper, even in a children's book, to provide some background to the familiar information most of us know about Martin Luther.

I appreciate that Carr included details about Luther's later-in-life anti-Semitism, but put that in the notes rather than in the midst of the story. That leaves parents free to discuss such things in their own way and time. It also introduces the reality that Luther was not always right in his beliefs. Again, he was a human, just as we are. And, we can take his strengths and be thankful for his bold actions while also evaluating his beliefs through our own studies of Scripture. This is, in fact, the greatest portion of Luther's legacy: the freedom and drive to explore the Word of God for ourselves.

I love timelines, so I would love to have seen a little more depth to Carr's timeline at the end of the book, especially after his marriage to Katherina von Bora. Also, it is hinted that the nailing of the 95 theses is not a definite historical fact. I would like to have seen this discussed a little more in the facts or in a historical note to parents, especially since this is heavily taught as fact in many resources.

Overall, I enjoy this book's approach to exploring both well- and lesser-known information about Luther and his story. I'm delighted to add Martin Luther to our collection of Christian Biographies for Young Readers.