It’s cold. Saturday got up to nearly 80° before plummeting to the 20’s, then on into the teens. It has barely risen above freezing since then. I love the cold. But, I don’t really have the clothes for this kind of cold! Haha!

It’s hard to wrap my head around the realization that it’s the week before Christmas. It’s not a stressful feeling – I still have things to do, but I’m mostly relaxed this week. But, still. Five more days? That seems unreal!

My days go so much more smoothly when I’m intentional. I’ve gone back and forth with that. Some days I’ve been diligent to use my timer to walk through my day. Other days I haven’t. I don’t know that the words effective, efficient, or productive fit what I am on the days I do follow through with the timer, because it doesn’t always mean that I get the to-do list accomplished. So, I’ve been trying to figure out what it is. The word “intentional” just keeps coming to mind. Oddly enough, I think I listen to the Holy Spirit better throughout the day when I use the timer. It helps me to focus on what is in front of me, then it makes me stop and really pay attention to the next step. So, yes, I am more intentional about everything.

Always make a practice of provoking your own mind to think out what it accepts easily. – Oswald Chambers from My Utmost for His Highest, December 15

A man who has poured life into my husband in so many ways said an earthly goodbye to his wife early yesterday morning. She had been battling cancer, and they knew the battle was coming to and end. But expecting a hard thing does not make it easier. Praying for him, their two sons, and their grandchildren.

The calmness that we have been able to enjoy this season, even on the busy days. It’s such a gift!

For some reason, when Olivia tells Steven that something looks “bleh” and needs to not look “bleh,” he’s not quite sure what to do with that! Fortunately, she doesn’t mind just taking care of it.

Oh, yeah, I guess it does. But I’m ignoring it until next week.

Something to Make You Smile!

Santa Cow is apparently getting some sleigh practice in before Saturday night. 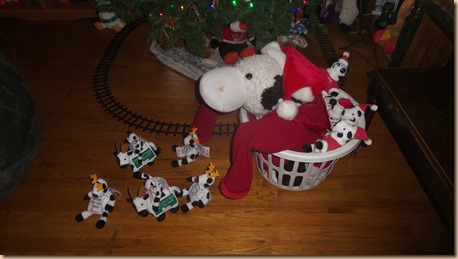 Meanwhile, he’s supposedly letting the mischievous cow twins, Fred and George, catch their ride now in hopes that they will not create mischief on Christmas Eve. I don’t think Santa Cow knows Fred and George as well as he might like to think. No amount of permission curbs their mischievousness! We find them in all sorts of interesting places doing all sorts of goofy things. So, they just might still be hitching a ride on Christmas Eve! 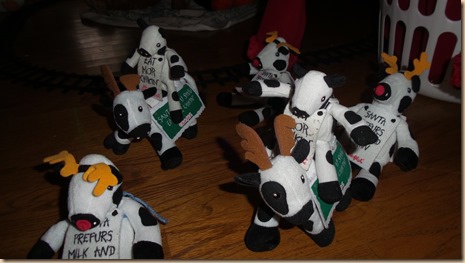 Christmas! Oh, wait, that one’s obvious. So is the new year.

But, the things that happen in the new year are a little more open to speculation. I’m looking forward to a couple of different devotionals, a new Bible reading plan, and a new focus on writing. That intentionality thing – yeah, it’s one thing to make resolutions or even goals for a year. But, if I don’t actually take intentional action to change what I am doing to make room for the new goals, they will never get met. So, what’s coming? Cleaning out some habits and activities to make room for the goals.

Herding Grasshoppers said…
Seems like December has just flown by! Glad you're enjoying your break :D
Merry Christmas!
December 21, 2016 at 9:02 AM