It’s another cloudy, rather gloomy day. But, I’m still feeling a bit motivated because yesterday actually seemed productive. Like I was on top of the day instead of it being on top of me. I like that feeling! So, I’m prayerfully progressing into today in similar fashion.

I’m not sure that there is anything unique about this week. In fact, weather-wise it’s a very typical December week. Up and down and up and down. Sunny and cloudy. Humid and dry. Yep, very typical!

I really was in the mood to find a funny observation for today, but instead I have a serious one.

Some people who have great talent discover it when they are part of a team. At some point, they strike out on their own, expecting their talent to hold them. But, it doesn’t. They missed the fact that their talent is dulled by solitude and independence. It isn’t so much that they lack talent on their own. It is more that combined talent makes everyone shine more brightly.

I have this nagging suspicion that all of the commands of Scripture to love one another and work together in the body relate to this. We all have a tendency to be pretty dull when we insist on striking out on our own.

I read this quote in My Utmost for His Highest today:

“We do the things that can be tabulated but we will not intercede. Intercession is the one thing that has no snares, because it keeps our relationship with God completely open.”

I so often fall into that trap. I like tangible, measurable activity. Prayer is not tangible. But I desire that it be my priority!

The implementation of Christmas projects! I’ve had some issues to resolve. One of them is resolved. Another is in the process.

The way that my children have worked in school this year, allowing us to take an extended Christmas break!

Friends who are as energized by us as we are by them. That’s a rare kind of friendship.

Those three pick on each other like crazy. But, they also like to encourage one another. I love it!

Meanwhile, here’s a picture. Yep, a pet again. But, this is too cute to not share. 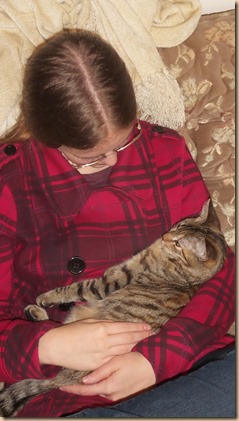 Still a secret! But I can show you one of Angie’s projects because her brother won’t see this post. This is the Christmas present she made for him – a wolf hat. He loves wolves and big dogs, and he loves fun winter hats. He is not ashamed to wear something like this! 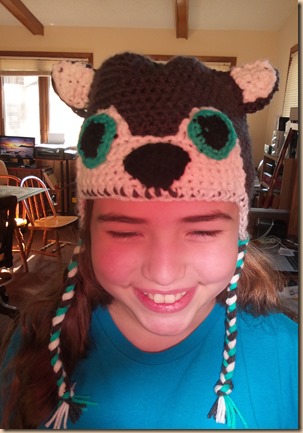 Actually, nothing!!! No school work. No grading. No planning. No nuttin’!

Something to Make You Smile!

At least, it makes me smile.

We taught the kids how to play spades last weekend. Now, Steven wants to play it all the time. In fact, right this moment, he is playing by himself while his sisters work on chores and some Christmas projects – managing all four hands. I love that boy!

Herding Grasshoppers said…
Hurray for getting school work done and having a longer Christmas break! I loved that about homeschooling :D

I'll have to think more about your teamwork ideas :D