Just a couple of sillies from the past few days...
I heard rumors that Angie was creating a bristle block kitty, but I had no idea how good it would look! I don't know if the pictures really do it justice, but this really did look like a colorful cat! I was quite impressed. I really do love building block toys so much more than the newer toys that do everything on their own! Bristle Blocks, Legos, Lincoln Logs - they all so greatly challenge the imagination to creations limited only by the number of blocks you have! 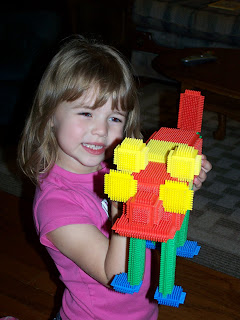 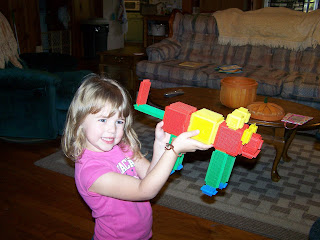 Here are a couple of videos of Steven. You'll have to turn your volume up because he's quiet, which is very rare for him. Well, at least he's quiet in part of the song! :-) The song is Steven singing This is the Day in Arabic. In the other video he's "reading" out loud. Like his sissies, he loves his books, and he's trying to mimic them - they read aloud to themselves and to each other, and he wants to be big like they are.

There's no new video or picture of Olivia right now, but I do have to brag on her. She's really stepping up to do the big girl things around the house. She practically begs to wash the dishes, and she's not afraid of those pots and pans, either! What a big help she's been.
Email Post
Labels: Video