Saturday morning Doug concocted a surprise. As we were getting up and going, he asked if we wanted to go to Little Rock for a little while. I had no idea until we got there what we were going to do - I just love surprises! He got in touch with my brother Ben and sister-in-law Ashley to see if they wanted to join us. Come to find out, they were actually thinking about coming to see us anyway!

We arrived in Little Rock, and pulled into an old strip mall. That's when I noticed the restaurant. Doug had found a Mediterranean restaurant! We walked inside, and Ben and Ashley were already there with a plate containing bowls of hummus, tabouli (Arabic salad, chopped very fine), and mouttabl (okay, so that might be a horrible phonetic spelling - it's an eggplant dip), and some small pieces of really good Arabic bread. Doug tried falafel for the first time and really liked it! I was delighted! It was a fabulous meal, even though the shwarma did taste more like a gyro than a real-life shwarma. I didn't care, though - it was all SO good!

Olivia got ahold of the camera and started snapping shots. She loves to take pictures. Here are a few of her shots - and then we got one with her in it. 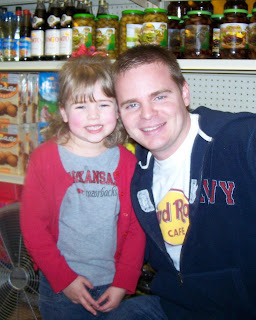 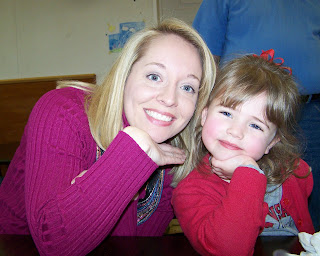 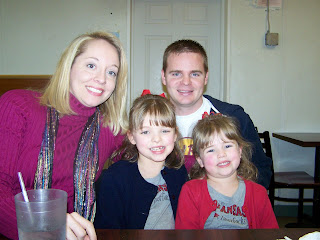 Then we all headed over to Ben and Ashley's apartment. The kids fed the ducks floating in the pond that their balcony overlooks - I think they went through every last bit of Ben & Ashley's bread!

Steven kept wanting to watch the ducks, and charmed Aunt Ashley into holding him up at the door so he could see better. 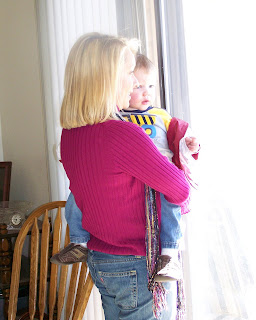 Then Ben turned on Rock Band so that everyone could try it. Here's my rock band! 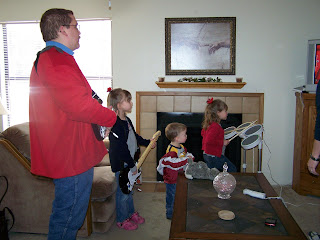 Steven got in on the action, "helping" Uncle Ben play the drums for a song or two. 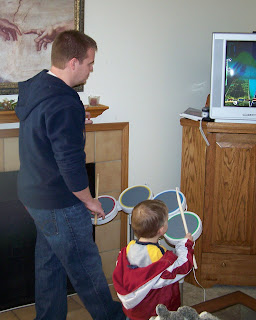 The rest of us got to try our hands at it too. 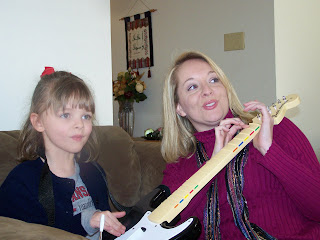 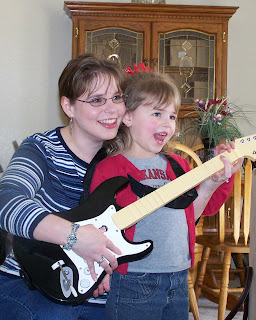 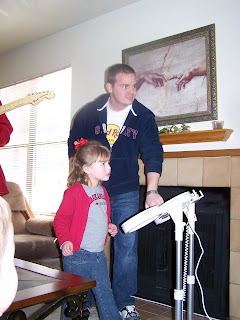 All we were lacking was some good Third Day - or even a throwback to Petra or Whiteheart would have been great! :-)

Such fun - it's nice to get out of town now and then, and it was great to enjoy good fellowship - and really good food!
Email Post
Labels: Brownings Outtings and Trips

Choate Family said…
What a sweet hubby! Petra is a great choice - we clean to their albums frequently.
February 3, 2009 at 2:58 PM