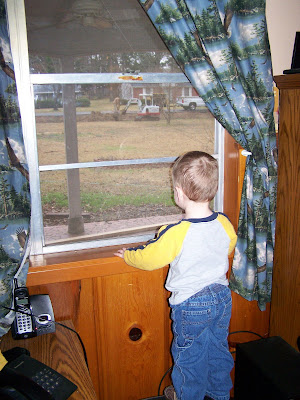 Steven was delighted when we came home from exercising yesterday morning to find a "tractor" in the street. He was disappointed when it wasn't digging. This morning at 8:00, though, men arrived and started using a jackhammer on the street and then proceeded to use the "tractor" to pull up the dirt and asphalt and dump it onto a city truck. (We were delighted because we'd awakened to the sound of rain and honestly did not expect work to be done today! How excited we were when the work began anyway!) He quickly planted himself on a little stool at the window so he could watch the work. It has been the highlight of his morning!

The funniest thing, though, has not been his excitement over the work done outside. The funny part has been his response. They stopped working for a while as they were waiting for the city truck to arrive to receive the dirt and asphalt. He was beside himself, begging me to go out and tell them to start digging again. Then I started hearing this... “Mommy, they’re going to dig! They’re going to dig! Mommy, will you please tell them to dig? I can go in that tractor! I can dig!” (And, yes, that is word for word!) The next statement was, "When I'm thirteen I can drive the tractor!" I didn't have the heart to tell him that the tractor would be gone before he was three, much less thirteen. After this, he decided that he knew best how the work should be done. He was not satisfied with the positioning of the trucks and other equipment. So, next I heard, "Mommy go tell them to move that truck over there! I don't want that truck there! Mommy, go tell them to dig. Mommy, there's another one truck! Look, Mommy, that truck is there! Tell them don't put dirt in that truck - put dirt in the other one truck!" Of course, he knows how it all must go, and he trusts Mommy to make sure it's all implemented just right. 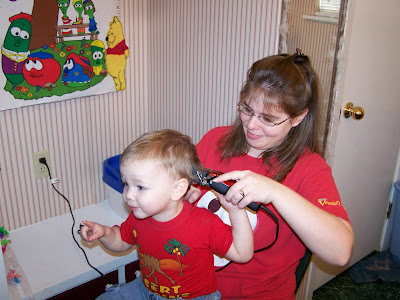 While we're on the subject of Steven, he had a "first" over the weekend. He's had several haircuts, considering he has more hair than either of his sisters at this age! But, he's never had it cut with the clippers. It took me long enough to get him to let me cut it with the scissors without an all-out screaming fit. But, we'd already talked about the fact that Daddy and Steven needed haircuts that day, and I had started with Doug with the clippers. So, Steven decided that he wanted me to use the clippers on him as well. He did so well, and it was SO much easier than trying to get it all even (which I never have been able to do) with those scissors. He wanted to help me, so he had his hand on the clippers most of the time, unless I had to cut at an angle he couldn't reach. Still definitely not a great haircut like he'd get if I took him somewhere (which he probably wouldn't tolerate), but much better than recent cuts. Yay for clippers!

And, since I'm telling stories of Steven, I have to share this one last story. We were in the van the other day and Steven was getting bossy with Doug. I turned around in my seat to take care of the situation, and made the mistake of saying, "Steven, you are not the boss." His response? "I am the boss!" I managed to reprimand him before turning around and laughing as silently as I possibly could. Doug couldn't hide his laughter from Steven quite as well thanks to the seating arrangement, so he nearly bit his finger off trying to keep from laughing out loud! Yes, our son does truly believe he's the boss. We're working on that one!
Email Post
Labels: Growning and Learning

Ruthanne said…
What? You only have one child who thinks he's the boss?

Stephanie Kay said…
We use the buzzers here also. With 3 sons and a husband I save big bucks by just buzzing them myself! Even that I can go to the nice place to get my hair done. :)
February 18, 2009 at 9:37 AM