One of Those Days...

Occasionally when the heater has decided it has worked too hard, it chooses to take a break. It's an easy problem to solve - just the flip of a switch turns it right back on again. But, first you have to realize it's not running as it should! That's kind of hard when it's the middle of the night and you don't fully wake up even though you're feeling a bit chillier than normal! :-) Such was the case this morning. The heater had decided to not try to combat the 20 degree temperature, and the house got rather chilly in the night. It made it quite difficult to get up and get going this morning.

Steven voiced his feelings on the matter by looking at Doug and saying, "I don't want Daddy to go to work today!" Awww....He was pretty easily convinced that Daddy needed to go to work anyway, but he stuck to Doug's side until the last minute. As Doug was putting on his coat, Steven asked for him to read just one book before he left. Now, how could anyone resist that? 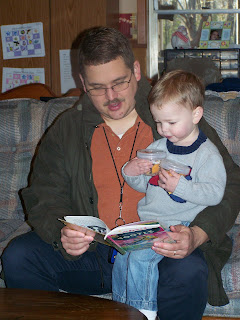 Steven held Doug's snack cups while Doug read, and then he took them to the van for Doug and made sure Doug got his coffee mug. He was taking such good care of his daddy! I just love it!

In school this week Olivia learned about personification. At first she had a bit of trouble applying the concept, wanting to utilize simile instead. But, as we worked together to come up with some sentences, she got the idea. Then, something we were reading later utilized personification, and she picked up on it immediately! This morning she's been using personification while working through her chores, making up stories about the mop and broom and interacting with them in quite humorous ways! I just love getting to listen to my children put into practice what they're learning!

Steven is continuing in a somewhat sensitive and nurturing mood today. He got out one of the girls' strollers, found a baby doll, and started pushing her around and giving her drinks from his sippy cup. He is such a boy most of the time, but it's so obvious that he has prissy older sisters to learn from!

Angie is excited this week. Last Easter each of the kids got a little ceramic egg containing a planted seed. Steven's plant sprouted but then died pretty quickly. Olivia's lasted until after we moved here, but then died. Only Angela's remained. Angela's sprouted long after either of the other two, and we wondered at times if it would make it. Just a few weeks ago it looked like we were about to lose it. It had just started producing buds for the first time, and then it started to wither. We figured it was suffering from the cold, as we had to make sure to leave it right in the window sill to give it enough sunlight. Then, suddenly it came back to life. This week we saw some new buds and one of them opened yesterday! She was absolutely thrilled!
Email Post
Labels: Daily Life Hibbard Elementary