Skip to main content
Posted by The Hibbard Family June 19, 2009

My camera has been out of commission for a few days. No, there's nothing wrong with it, but it has been quite some time since I've cleaned it off. That's what happens with a HUGE memory card to hold hundreds of pictures! I had cleaned it off several months ago, but hadn't had the chance to go ahead and sort pictures and put them into their appropriate files for long-term storage. Instead I just made a backup of the unsorted pictures. So, not only did I have the pictures currently on the camera, but I also had a back-log on the computer. So, I spent all afternoon Tuesday and several moments here and there since then trying to get caught up so I can backup the pictures appropriately and clear off the camera. Angela's pictures and pictures of the kids together hadn't been properly sorted since January. Olivia and Steven's unsorted mess went all the way back to October! Oops!

I'm almost done at this point - I just have to finish Steven's pictures. As I was going through them, sorting them by month, though, I found a few pictures that I'd recently taken and forgot to post. They are just CUTE! At least in my opinion - I know, I'm a bit biased.

I was working around the house the other day, and I hear a little sing-song voice say, "Mommy, I'm hiding from you!" I found him under the computer desk! Then I hear, "Take a picture of me, Mommy!" (No, he's not used to me taking pictures of every little adorable thing! What could possible make you think that?) 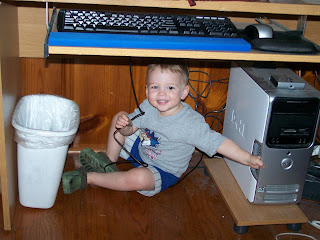 Then there's the hat. He discovered Doug's straw hat the other day after Doug wore it while mowing the yard. "Look, Mommy! I'm a cowboy!" (Oh, and just FYI - that is Ouachita Tigers on his shirt, not LSU! :-) That's very important to him - in fact, he got mad at me both yesterday morning and this morning because I haven't gotten his Ouachita shirt clean for him to wear again! It'll be ready for tomorrow morning, that's for sure!) 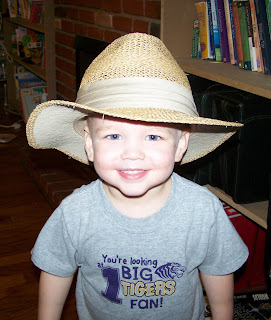 He can see thorugh the straw weaving. So, he pulls it down over his face, walks around until he finds me, and then says, "Where's Steven?" He's a mess! And now, back to finishing the pictures so the camera will be ready for our big trip!
Email Post