Yesterday morning we were getting going on our day when I just happened to take a sideways glance at Angie. I looked at her and then turned to Doug and said, "I think I might need to measure her!" He glanced at her and quickly said, "I think you're right!" So, a few minutes later I called to Angela and headed to the bathroom to measure her. Of course, this brought great excitement as all of my kids love to be measured! 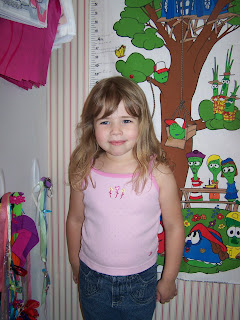 I knew she'd grown, but I was quite blown away by exactly how much! See, I'd just measured the kids less than two months ago - April 17, to be exact! In that length of time, Angela, who has grown the least of all three kids over the past year or so, had grown an inch and a quarter! No wonder she looked taller! 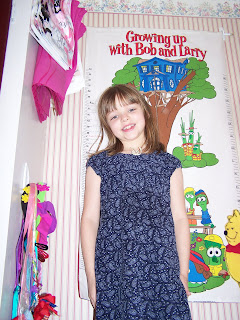 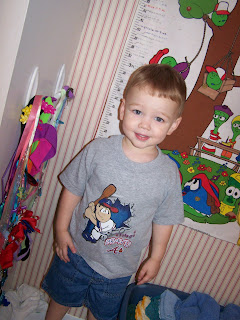 Do you think bricks would work? Can they be found with straps so they can be worn as hats? Na - I don't think it would work. Besides, to be honest, it's a lot of fun to watch them grow, even if I do occasionally miss the "little" days!
Email Post
Labels: Growning and Learning

Beth said…
Sometimes I try and convince myself that my kid's clothes are shrinking! But, when Lydia put on a dress that hit just above her ankles last summer and not hits just below her knees, I have to acknowledge that it's not the dryer's fault!
June 4, 2009 at 11:30 AM

Herding Grasshoppers said…
I think my kids grow over the summer... they shoot up like dandelions.

After all those weeks of wearing shorts, when fall comes all their pants are too small :0)

I miss the days of "littles",