We're getting ready to head to Kentucky! Woo-hoo! We're going for the Southern Baptist Convention's annual meeting - the first we've ever been able to attend. We're quite excited. This will the extent of vacationing for us this year, so we're really looking forward to it.

The kids travel really well, but it will still be a much longer trip than they're used to. Going up we'll break it up and get in some very quick visits with some friends in the Memphis area. That'll be fun! Still, it's a lot of car time, and we're a little nervous about cooping pent-up Steven energy in the van...

See what I mean? :-) No, we're not really worried about it - I just came across that video from when Steven did have some pent-up energy on a recent trip to Little Rock, and I just had to share it. He was so funny that day!

Still, we are trying to be prepared. So, I've spent some time this past week printing off some activities and making a few things for their car activity baskets - stuff to go along with their books, our group car games, and lovely nap time.

I wanted to share one of those activities because it could be such a handy activity in the car or on a rainy day!

My kids love Cuisenaire Pattern Blocks. These colorful blocks are frequently seen with pattern cards that you can use to help create pictures, but we don't actually have the cards. I've thought about trying to buy some, but the kids make up all sorts of awesome patterns with them using their own imagination! So, I've never actually bothered with the patterns. 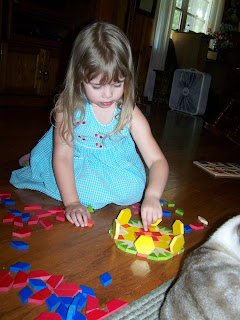 I knew if they were portable, the pattern blocks would provide a great deal of fun in the van, but I couldn't imagine how to keep them from falling everywhere! That's when the idea of felt pattern blocks came to me. Just in case you want to make your own, here's what I did...

All six shapes have one-inch sides - except for the trapezoid, which has a long side that is two inches. Using Microsoft Publisher's shape patterns, I sized all six shapes appropriately, colored them to match our wooden blocks, and then copied each shape until I had an acceptable number of each one. Then I printed them out on card stock. Using craft glue, I glued each card stock page to a piece of stiff felt and then cut out each shape. Yes, it was a bit time consuming to make enough for three kids, but Olivia was able to help, and the result was well worth the work! 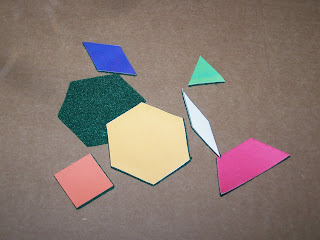 I then made felt boards for each kid. I cut out lap-sized rectangles from very thick cardboard (an extra-sturdy box), and then cut a rectangle from some soft felt - about two inches larger than the cardboard. 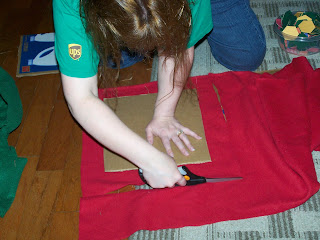 Next I cut slits in the corners of the felt and then folded the felt panels down over the cardboard, pulling it tightly to give the board a very smooth, flat surface. 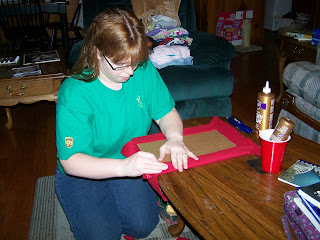 To test the end result, Olivia made a flower - I turned the board nearly upside down, and the flower still clung to the board! I think it'll work! 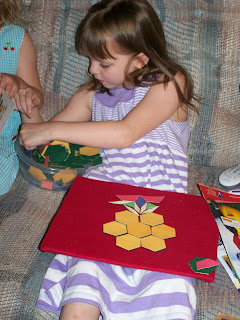 (PS - If any of you have Publisher 2007 and are interested in my pattern pages, let me know. I would be happy to email them to you.)
Email Post
Labels: Activities and Creations Video

Tim and Leslie said…
You are such a fun momma Ann! They will love having those for the trip! Hey, my parents will be at the convention this year. Look for them! HA HA! Jack and Karen Ables Just in case God puts you in each other's paths(he is cool that way!)
June 16, 2009 at 8:27 PM