Remember our trip to the pumpkin patch? Well, this past weekend we finally had the opportunity to dig into those pumpkins and harvest their flesh and seeds.

I must confess, this is something we have never done before. So, we honestly had no idea what to expect. But, thanks to the plethora of information available on the world wide web, we had great guidance through the whole process.

After I cut the pumpkins in half, the girls helped me dig in to the ooey gooey centers to pull out the seeds and strings. 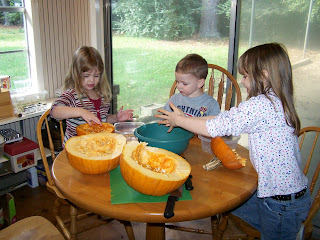 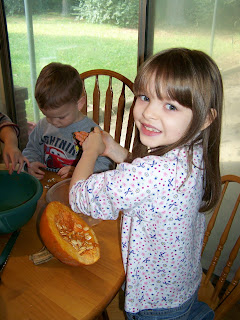 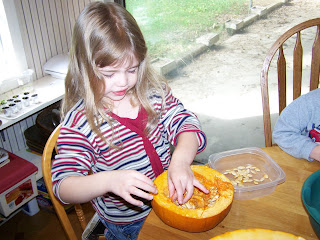 We separated the seeds from the stringy center and put them aside for roasting. 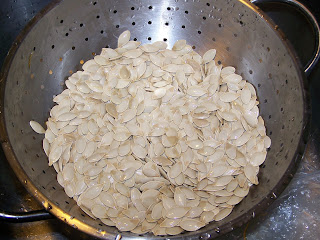 The smallest pumpkin really did not have decent fruit. So, we just harvested the seeds from it. The middle sized pumpkin had the nicest looking flesh. It was also a good size for baking. So, once the seeds and stringy gooeyness was cleaned out from the inside, we put the halves face down on a baking sheet, covered them tightly with foil, and put them in the oven. We were supposed to back them for an hour to an hour and a half at 375 until tender, but after a little over an hour they were nowhere near done and we really had to head out to run some errands. So, we gave it about five more minutes at full heat and then turned the oven off, leaving it all sealed up and baking in the residual heat until we got home about four hours later. The pumpkin was perfect!! It was wonderfully tender and could be scooped out of the peel with a spoon!! We scooped it into a blender and ended up with a nice bowlful of beautiful orange pumpkin puree.

The larger pumpkin was too big for the oven, so we cut the flesh into chunks and steamed it for about 35 to 40 minutes. I must say that the baking was much easier, although once this was steamed it pureed nicely as well. 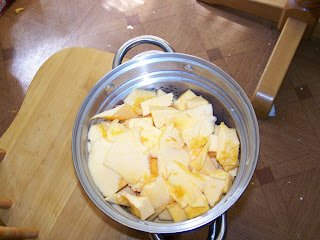 After draining the excess liquid out over night, we had a nice harvest of pumpkin for pumpkin bread, pumpkin roll, pumpkin cheesecake...mmmmmm. But, for now, the pumpkin will rest in the freezer until we can actually find a free day to do all of that baking!!

Oh, and that basket of seeds? Spread out on in a single layer on a couple of lightly sprayed pans, sprayed again on top, lightly salted, and roasted at 375-400 for about half an hour. YUM, YUM, YUM!!!
Email Post
Labels: Activities and Creations

Choate Family said…
Your kids will actually know where pumpkin comes from - good for you! Break out the cinnamon and cloves...I think I'm coming over to help you consume all that pumkin :-)
October 21, 2009 at 2:04 PM

Herding Grasshoppers said…
Oh, we love roasted pumpkin seeds! We sprinkle them with a bit of Lawry's seasoning salt.