I don’t think I have all of the pictures from Homecoming on the computer. Yes, even after a week and a half! But, here are a few…

We started up on the main campus Saturday morning, milling 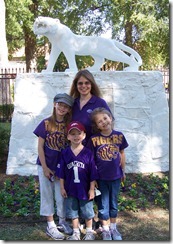 around the crowd, looking for friends. We saw some faculty and we saw Ryan and Karlyn Hillman! I joked with someone later about how funny it was that they were the one family we ran into as we were milling around, considering we live three blocks from them! But, the kids enjoyed wandering around, and of course had a great time on the huge inflatable slide set up in the middle of everything! Because, of course, that’s what it’s all about! 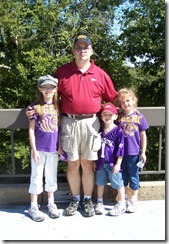 We snapped a few pictures, ate lunch, met a couple from Alabama whose son was an OBU student. It’s fun how it all feels like one big family just because of the Ouachita ties.

After lunch, we made our way down to the football field to go see part of the game. It was a pretty warm day, so we were all ready to sit in the shade for a little while! We were glad then and there that we only planned to watch part of the game!

Okay, so the game didn’t go so well for OBU, but as we were headed in, a friend from the Baptist state convention offices commented about the difference between a game at Ouachita and, say, a Razorback game. At Ouachita, it’s a family reunion with a game going on in the background. Other places it’s all about the football. We cheer on the OBU Tigers nearly every week and it would have been nice to be there for a winning game. But, just being there was fun! And, I did see a couple of old friends for the first time since graduation! It was so awesome to sit and chat with them in person (as opposed to the Facebook chats we’re used to) for a few minutes!

Of course, our favorite part of the afternoon was the band. We love the band! 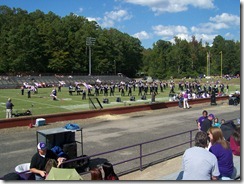 After the band’s halftime show, we headed out, but not before stopping to pose with the mascot as the band was returning to their seats. 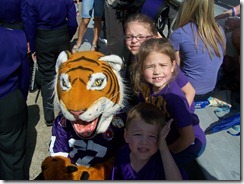 Despite the heat, it was a fun day!

Oh – and we saw the best OBU shirt ever while we were at the game. It had “Ouachita” written at the top, and under it was written something to the effect of: “That’s pronounced Wa-shi-taw!” Yep, that’s us!

Stephanie Kay said…
Aww.. you make me wish we could attend a homecoming. We've been on campus a couple of times in the last 15 years when we've visited friends in Arkadelphia but we've never attended homecoming or a class reunion. Just one more reason not to live half way across the country.
October 20, 2011 at 9:49 AM