Two weeks ago Doug and I headed to Arkadelphia for conferences and left the kids with Alicia Jo. When we returned to pick them up, we found three bags full of these tiny pumpkins stacked among their things! Lots of pumpkins is an understatement! 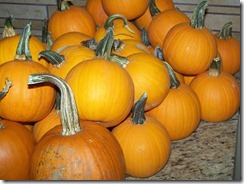 Olivia has a few of them in her room as fall decorations. The girls have set a few more aside to make candle holders with their Sunday school teacher. (I’m really curious to see them! That’s a new idea for this craft-challenged mom!)

But the rest? Well, I have no clue what variety these are, but I have heard that the smaller the pumpkin, the sweeter the fruit. And these are definitely small! So, I figure it won’t hurt to try to cook them down to store for pumpkin bread. The smallest is about the size of a large orange, and the biggest – of which there are only a few – are probably no more than three times that size. None of them is as big as the pie pumpkins Wal-Mart is selling right now. But, so far I’ve cut up and cooked three of them. The rind was so thin that there was a lot more good fruit in them than I expected! And, it was nice and smooth – no real stringiness to speak of. I’m no pumpkin connoisseur, but I figure it’s worth testing on a batch or two of pumpkin bread. If our resident pumpkin bread fanatic (aka Steven) says it’s good, then who am I to argue?