Look at the beautiful gift from God that we woke up to this morning!! 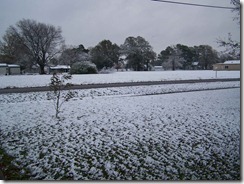 Obviously not a big snow, although it was definitely more a layer than a dusting. Not really enough to get up under the trees, though. 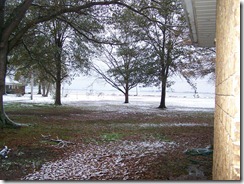 But enough to blanket the wood pile (most of the wood is up under the church van’s carport to keep it dry). 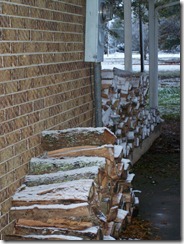 It was a very, very wet snow, thanks to the 6 inches of rain we’ve gotten in the past week or so. So, we couldn’t get out in it at all. But, it was SOOO pretty! It’s pretty rare for us to get snow in December, so we were excited.

It was all we could do to hold off until 7:00 to get the kids up. We had a late night last night, and I wanted them to get their last few minutes of sleep. But, we finally went in to each room and opened the shades, telling the kids they really wanted to look outside. Steven just couldn’t wake up, so Doug picked him up and carried him to the window. He still had his eyes closed in Doug’s arms, so I gently encouraged him that he really wanted to open his eyes. He barely cracked them open to look, and then they flew open wide and he exclaimed, in a still sleepy but excited voice, “It snowed!!”

The sun came out mid-morning, and the snow was all gone by 11:00. But, we’re still riding on the excitement of waking up to it unexpectedly. Such a sweet blessing!