Every time Doug went hunting last year, the deer seemed to know it. He never saw a single one – well, unless you count seeing them on the drive home, casually strolling on someone else’s property!

Up until this week, this year has shaped up to be about the same. He’s been out a couple of times, but has never seen anything.

Yesterday afternoon he went out to our friend Gary’s farm. And the deer came to see him! He was contemplating shooting a large doe when this six-point buck came wandering up. He put one shot in the neck and it went right down.

Gary drove his truck back around to pick Doug and the deer up, and they brought it home for us to see before they headed on over to the processor. Not too shabby for a first-ever kill! 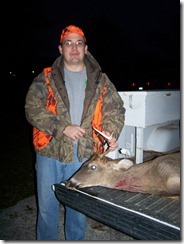 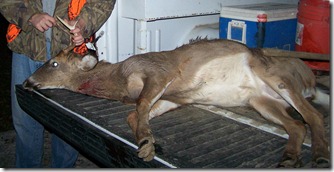