Evidently, Doug wasn’t the only one hunting this week. Napoleon did his share as well!! He went out yesterday morning and enjoyed a successful hunt.

I missed getting a picture of him in his full orange apparel, but Doug got some pictures of him with his kill.

And what was our favorite family penguin hunting? Why, possum, of course! He managed to nab a nice, fat one! 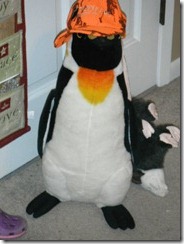 Later in the day, Napoleon followed Chef Bun-Bun to the kitchen to oversee the preparation of the possum delicacy of the day. 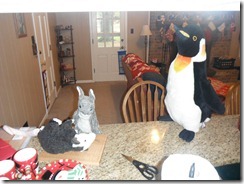 Meanwhile, Angela was cackling through it all. Apparently she was the mastermind behind Napoleon’s hunting expedition. As Doug’s faithful kitchen assistant, Chef Bun-Bun was delighted to be a part of the whole experience!

Stuffed animals and family creativity are so much fun!