What a glorious week! The kids got to do something awesome…

They got to play outside!!

That’s a big deal around here. It’s either too wet, too hot, or too mosquito or buffalo gnat infested to play outside most of the year. The kids will last a few minutes, but then come in claiming that they’re tired of fighting the mud, getting eaten alive by bugs, or too hot. Such is life. But this week has been beautiful! Perfect temperatures and miraculously no mosquitoes! A couple of the days were pretty windy, so that might have had something to do with the absent mosquitoes. They only missed being outside two days this week – Tuesday because we were gone and Wednesday because they only thought about it first thing in the morning when it was still wet from a rain shower the night before.

But, other than that, they’ve had a blast! Most days they were out in shorts as the temps climbed into the upper 70’s. But today they had to pull the light jackets back out. They didn’t seem to mind, though, as long as it meant being out in the sunshine!

They climbed those trees, rode their bikes, and built forts out of fallen sticks from the yard. 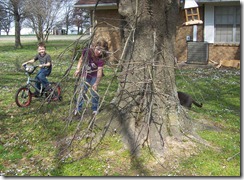 Unless the mosquitoes come out, the weather forecast indicates that next week just might be a repeat adventure. Yay for an outdoors kind of spring!