In the great outdoors...wet after a slow, steady two and a half hours of rain yesterday! I think the average report has been about an inch. It was wonderful! Definitely worth the humidity of today.

A heart of thanksgiving...for the rain, for our wonderful weekend with the Choates, for a bit of calm on the calendar.

A heart of prayer...for Isabella Day as she goes in tomorrow for attempt #2 on her second round of chemo. She was supposed to go last Wednesday, but her white blood count was too low. So, the prayer is that tomorrow her count will be high enough and that this second round of chemo will reduce the tumor enough for surgery.

Also praying for a bloggy friend’s son (Tate) who is recovering from cochlear implant surgery – part of a long process to battle his hearing loss. Also Brian, the brother-in-law of one of our church members and an Arkansas pastor – he was involved in a serious car accident yesterday and has a fractured skull and vertebrae as well as broken arms, one of them very seriously damaged.

My diversions...there’s no telling what I will get into this week! I will have no children at home Thursday afternoon! I hope to write a good bit and just get caught up on some things. But, it might mean I can finally get back to some sewing, too!

Thoughts from the kitchen...I just realized I was supposed to be working on granola bars, but I came in here to write instead!

On my bookshelf...lots! In the coming months I get to read The Truth About the Lordship of Christ (was supposed to read that one last week, but it’s been postponed), Eye of the Sword, The Book of Books: The Bible Retold, Wish You Were Here, Glamorous Illusions, The Money Saving Mom’s Budget, Taken (with Olivia), Battle at Blue Licks (also with Olivia), Peril, and The Hooks Files (one Olivia has already read). Looks like I have a fun summer ahead of me!

Projects...it’s birthday season. I still have two months before Steven’s and three til Angie’s, but I need to get busy contemplating whether or not they’re getting homemade gifts!

Sounds of the moment...Third Day’s “Give” on iTunes, kids playing in the next room – we have one extra for the evening, the air conditioner blowing.

Last week we learned...that Olivia’s observation skills are definitely improving. She takes after her mommy – we both have to really work at being observant. But critical thinking exercises and the fact that she loves mysteries are definitely helping improve her observation skills. Our read-aloud for the past few weeks has included a bit of a mystery, and she’s been putting the pieces together to try to solve it. Neither of us got it right at first, but neither did the protagonist…

A favorite thing from last week...the Choates’ weekend visit. It was neat to see how quickly even the kids fell back into beautiful interaction. More on that soon.

The planner...school except for Thursday. I’ll be dropping the kids off at JoJo’s on my way to Bernina Club, and they’ll be there all day! Other than that, we just have a bunch of piddly things on the to-do list that desperately need to get done, but don’t really qualify as big planner events. 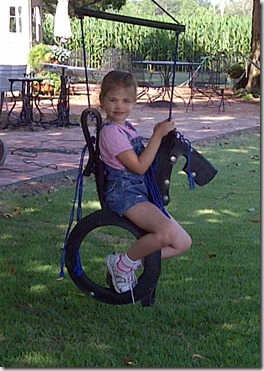 Herding Grasshoppers said…
Oh Ann, I wish we shared a back fence ;D

Thanks for the peek into your week,