I love rain. I know Isaac’s impending approach has been a stress for the farmers around here, and our whole family has been praying for his punch to weaken. But I have to admit I’ve really, really been looking forward to the wonderful rain!

We’re only about two hours in, and we expect a lot more rain to fall. But so far so good. No storminess, and for the time being our chances for the bad stuff (tornadoes, specifically) seem relatively low. The wind has been steady, but not too bad, with occasional high gusts. If it continues like this, which seems to be the greatest likelihood, our biggest issue will be the fact that the models call for anywhere from two to thirteen inches of rainfall by tomorrow morning (depending, of course, on who you listen to!). Our roads will probably be flooded almost as much due to farmers trying to keep their fields drained as to the rainfall itself. But hopefully the rice and corn will be able to stay up!

So, I’m going to enjoy this rain!!! And while I do, I’ll share pictures that I forgot to share a few weeks ago.

One beautiful and unseasonably cool Saturday earlier in the month, a church member took us out to a local park where hummingbirds were being caught, weighed, measured, banded, and released. We spent most of our morning learning about hummingbirds, and only toward the end did we actually see them banded. It was absolutely fascinating!

Because the birds are so tiny and so quick, pictures were hard to get. And the pictures I got really don’t show much. But, I’ll share what I have!

First, here is a sample band – just over a millimeter in diameter! Each band holds a number, and that number is used to track the hummingbirds as they migrate and return to former stomping grounds. Through those bands, many people have discovered that the same birds come back to their homes year after year. 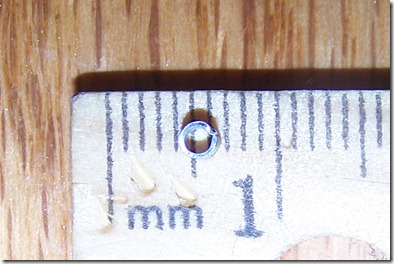 The birds are caught with cages like this one. The doors are placed at the bottom of the cage with the feeders hung in the top. Hummingbirds only fly up. Once they are inside the cage, they will not fly back down to the doors. So, the doors can be left open. Once they are in the cages, they are caught and placed inside mesh bags like the ones this man is holding. 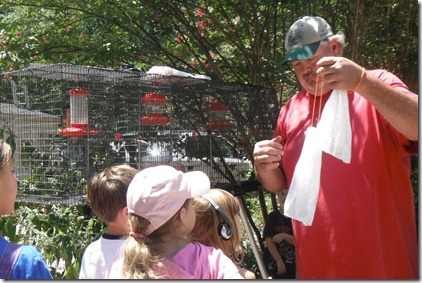 After a bird is caught, it is checked to see if it’s already banded. If so, it is weighed, measured (tail length, bill length, etc.), the information is recorded, and then it is released again. If it has not been banded yet, the banding comes first. An open band is inserted into these custom-made pliers. The pliers will close the band, but cannot close too tightly. 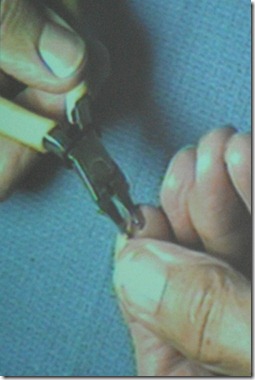 The bird is placed inside a nylon stocking, and the handler exposes only the leg to be checked or banded. Once the band is on, the handler makes sure it can rotate freely – yes, that little bitty band rotates freely around that tiny leg!!! Once the banding is done, the bird is weighed, measured, and prepared to be released. 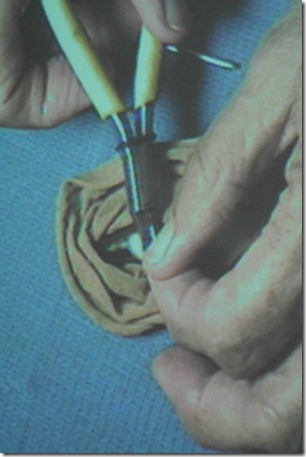 The little bird is placed gently in an open palm to be released. Occasionally the bird will wait a few moments before taking off, but typically it will speed away as soon as it is released. 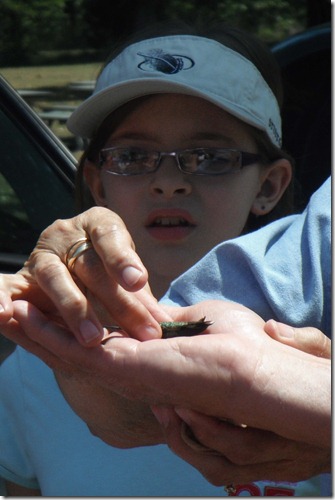 To say we were fascinated is an understatement. Every single tiny feature of these birds boldly declares the awesomeness of our amazing Creator!

Herding Grasshoppers said…
Wow! That IS fascinating. So tiny!