In the great outdoors...fall. Nippy air (mid to upper 50’s), partly sunny, and leaves everywhere. We didn’t get a whole lot of color around here, but I still love to see the leaves falling. They’re a bit soggy right now but still pretty.

Within our four walls...clutter. Life’s been a little crazy for a couple of weeks, and I just haven’t bothered with the clutter much. I’ll have to get on top of that soon.

A heart of thanksgiving...pretty obvious today – I’m thankful for the freedom to vote. In all honesty, it wouldn’t surprise me to see my children robbed of that opportunity, possibly even before they ever have the chance to do it once. I hope to be proven wrong. It’s fun to take them in with us and walk them through the voting process.

A heart of prayer...for Christians to remember that it doesn’t really matter who the President is. One might make our lives much harder while another might allow us some breathing room for a little while longer. But ultimately, the plan of our God, the true Ruler of rulers, does not suffer at the whims of our earthly elections.

Thoughts from the kitchen...not doing a whole lot of cooking this week, thanks to being included in the church’s feeding of our revival preacher and his family. I think I’ll need to eat nothing for the second half of this week after convention and revival eating!!

On my bookshelf...so much fun reading I want to do! Fortunately, most of it also falls into the category of review reading, so it counts as “work.” Have I mentioned that I love being a reviewer? We did find the Scottish fiction series based on Leah and Rachel written by Liz Curtis Higgs. I absolutely love her similar series based on Ruth, and when we ran across this three-book series for $5 a book I was delighted! Hopefully I’ll get to read in before Christmas.

Projects...Christmas projects, of course! Since my children do not read the blog, I’ll probably start posting pictures of what they’re making for each other. It’s so much fun to help them work on their gifts and see how excited they are with every step of the process!

Sounds of the moment...the kids enjoying a bit of Wii time in the next room. They’ve been real troopers with our late nights the past couple of weeks.

Olivia: basic economics, Asia, The Horse and His Boy as our read-aloud – loving that!, fractions, personal hygiene, capitalization

By the way – it is completely coincidental that they are all three learning capitalization in language arts at the same time!

A favorite thing from last week...seeing God draw people together to do as a team what each one could not handle alone. I get to be a part of that team. What an amazing blessing!

The planner...two more nights of revival (started Saturday night), and then rest and recuperation the rest of the week. Hopefully I’ll get the clutter under control and make progress on Christmas presents. Oh, and the arts center director called and said Angela has been invited to another six weeks of art classes! The new round started yesterday, but we didn’t make it. We’ll start back next week. I don’t think Olivia has another round – kind of relieved by that!

Because visuals are fun...Steven was so excited about his first loose tooth, and it seemed so ready to come out. But the front tail of the root was stubbornly clinging. He ate an apple for snack with the intention of trying to pry that tooth out of his mouth. It worked! The one beside it is loose, too, so I expect it to come out in the next week or two. 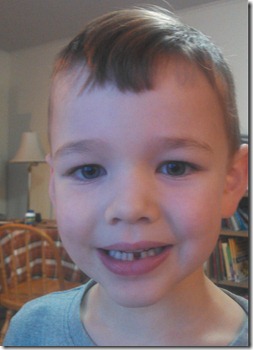 Choate Family said…
Katherine can't wait to enjoy her first loose tooth! Praying for you guys during revival - may you come out of it filled up and overflowing :-)
November 7, 2012 at 4:26 PM