Warning!!! Not for the Squeamish!

As promised, here are the pictures of Olivia and her raccoon skinning adventure! But, seriously, if you are squeamish about blood and guts, don’t go past the cute picture the of the kids on the tire swing. My goal was to put enough at the top of this post that no one has to accidentally see something they don’t want to see! I’ve done my duty and you’ve been warned!

Before we began our extended family Thanksgiving celebrations, we went out to join a church family for their dinner at the farm. When we got there, our church member’s son was getting ready to skin the raccoons he’d killed earlier. He sells the pelts, so he is very meticulous about the skinning process. But, he’s also very skilled and quick!

Steven found out what was going on and ran back to the girls yelling, “He’s skinning a coon!” Angela said, “Ew!” and stayed perched on the tire swing where they’d been playing. 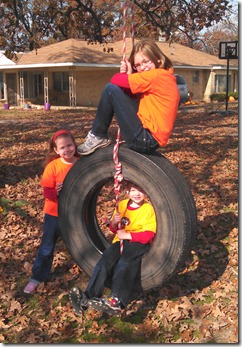 Olivia, though, came running! Slade was almost finished skinning the first coon, but he was getting some meat off for his folks. So, Olivia watched that. As he cut it open more, Olivia started noticing internal organs and naming them. Slade (a nurse) walked her through several more of them, and then they dissected the little heart together. 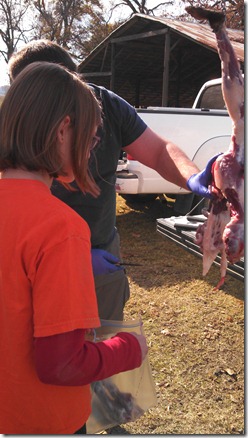 But the fun really started when Slade asked if Olivia wanted to help him skin the second coon. What a silly question! Barry (our music minister and Slade’s step-dad) brought out a giant plastic bag and cut holes in it for Olivia's head and arms so she’d have an apron. Slade got her gloved up, and they set to work. He got it started and then told Olivia what to do. 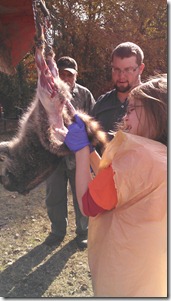 Then he helped out when the pulling got a little tough. 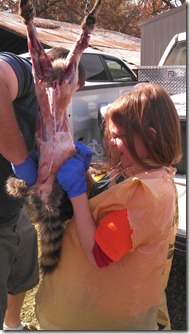 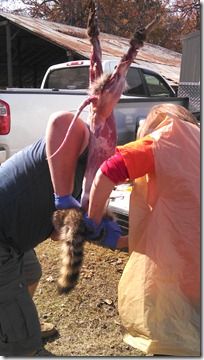 But as often as possible he told her what to do and let her try it. He was an excellent teacher. 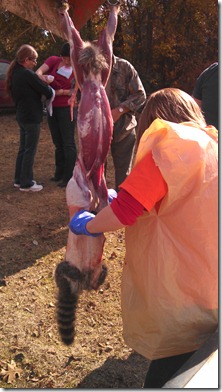 Next came the deer someone had shot that morning. Olivia didn’t help with that one, but she watched like a hawk! 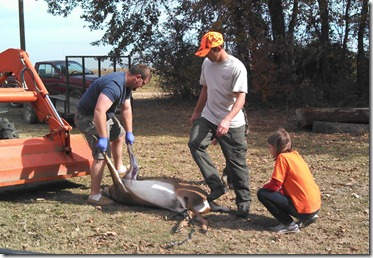 She did come home with the deer heart. We were going to cook it up to go with Thanksgiving dinner, but we just ran out of time and energy to add that to the list!

Herding Grasshoppers said…
Hurray for Olivia, and big thanks to Slade for a wonderful, educational opportunity :D
November 29, 2012 at 1:57 PM