Yesterday I mentioned the kids’ Sunday Thanksgiving performance. They did such a great job! Here’s the whole group: back – Jada, Angela, Olivia; front – Ian, Sawyer, Steven 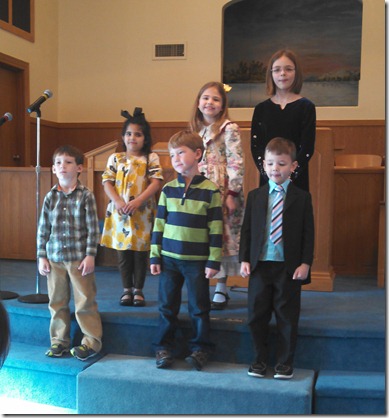 They all had memorized speaking parts, which they performed beautifully! Somehow I missed snapping a picture when Angela and Jada were up, but here are the pictures of Olivia & Ian and Steven & Sawyer. (It looks like they’re talking at the same time, but they really weren’t – each child had individual parts.) 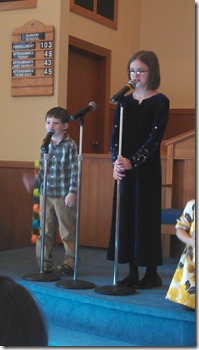 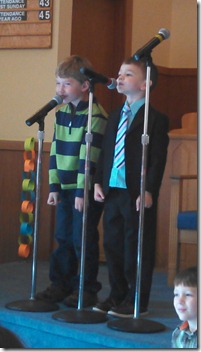 This is my favorite shot! They were singing about how much they have to be thankful for, and in this particular verse they were singing, “We have our family to be thankful for!” They were supposed to wrap their arms around each other while they sang. For the record, we really don’t think Ian was trying to strangle his cousin Sawyer, but with that mischievous grin on his face, there’s no telling what he was trying to do! 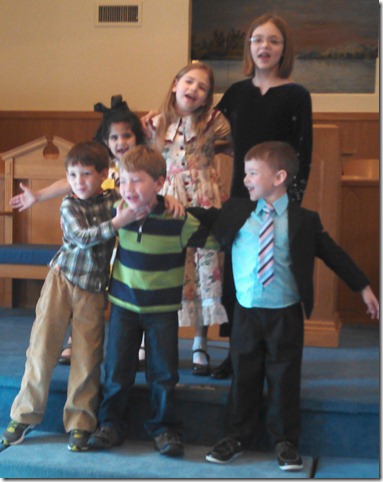 I wanted to upload video of all of the solos, but the videos don’t seem to want to upload. So, suffice it to say all six children had solos – Olivia and Angela in the first song and the younger four in the song’s reprise at the end. We were so proud of them! They did a great job!