(I typically only publish my “grown-up” reviews on The Joy of Writing, but I thought it might be fun to share them here as well. So, here goes…)

Over the past year, I have had to drastically decrease the number of books I accept for review. But, I still love to review books, especially when it allows me to discover new authors or pursue books I might not otherwise think to obtain.

In all honesty, though, The Secret of Pembrooke Park by Julie Klassen did 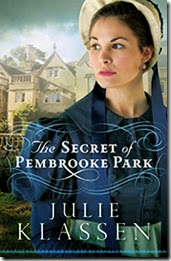 not fall  into either of those categories. I should have known to pursue this one. After all, a few years ago I reviewed The Girl in the Gatehouse, an earlier novel by the same author. Later, I read Klassen’s The Apothecary’s Daughter, thoroughly enjoying it as well. I have to wonder why I haven’t snatched up every book of Klassen’s as it has come up for review or shown up free for Kindle – or added her to my list of authors for my husband to keep an eye on. (He’s so good to me!)

Obviously, I went into my reading of The Secret of Pembrooke Park with high expectations. Klassen dives into British life with her usual flair for detail, but she also has quite a skillful knack for providing the perfect amount of mystery, keeping readers uncertain until the perfect moment.

Abigail Foster, heroine of this captivating tale, feels responsible for the sudden financial ruin her family is facing. Simultaneously enduring the rejection of the man she has loved since childhood, Abigail sees little hope in her future. But, an unexpected invitation to move to the mysterious Pembrooke Park rekindles that hope ever so slightly. Rumors of a treasure locked away in a secret room lead her on a search through her new home. But she is not the only one searching.

Why are her new neighbors so tight-lipped? What are they so desperate to hide? Does the treasure even exist? If so, where? And how many of the people around her can be trusted as she searches for clues?

As is the case with any mystery, it is not long before the reader of The Secret of Pembrooke Park will begin to make suppositions about the plot and characters. But Klassen has a way of obscuring the truth in plain sight. And I love every unexpected surprise!

So, would I give a negative? It is so hard to do so, just as it was with The Girl in the Gatehouse. But, I will say this: Some of the references to British society in the early 1800’s are foreign to me. I am clearer on American history during this time frame, and I was occasionally unclear in regards to a few of the societal references that I have not yet discovered in other British society novels I’ve read. Small price to pay, though, especially considering I love to learn new things about history!

As for positives, there is the delight of being able to say, “That is not who I guessed that would be!” But, there is also this: the romances are not all neatly tied up. Heartbreak and tragedy coincide with fulfillment. Some characters do end up alone, as happens in life. I like the unpredictability of that, and the variation it brings from the typical romance novel template.

Ultimately, The Secret of Pembrooke Park not only lived up to my expectations – it exceeded them. And it awakened me to the idea that I am a Julie Klassen fan after all.