Skip to main content
Posted by The Hibbard Family January 12, 2015

In the great outdoors...much gloominess today. I am thankful, though, that we did not get the ice forecasted for the wee hours of Sunday morning. While I’d love some snow to brighten up this cold, I’m definitely glad for no ice.

Within our four walls...decluttering is in process, slowly but surely. We love reorganization projects, and we were going to tackle one in one fell swoop on Saturday. But, we are instead doing a little at a time. While it does not provide the great adrenaline rush of one big, full day, I think it might challenge our way of thinking. A little at a time. Here and there. As we have opportunity and ideas. And it gets done. And maybe it will get done more effectively, more efficiently, and more frequently as we progress toward a life of less and less clutter.

A heart of thanksgiving...for the lack of ice, for a well-insulated house, for friends

A heart of prayer...for the growth of our church; for the Choate family as they prayerfully seek direction for the coming months (here’s an update); and for my heart to be soft, allowing the guidance of the Holy Spirit – not my presuppositions – to inform all of my responses, attitudes, and interactions.

Random observations...So, Olivia’s tennis shoes are wearing out, and I told Doug the other day that we needed to get her new ones. Then, it dawned on me that she already had another pair. The pair she’s been wearing were hand-me-downs received not long after we bought her last pair. But the hand-me-downs were WAY cooler because they were all bright and colorful! So, the other pair has been patiently waiting in the closet. Fortunately, her feet seem to have stopped growing, at least for the time being, so the others still fit.

And I rejoiced that we didn’t have to go shoe shopping after all.

Until I looked down at Steven’s foot.

“Is that your toe pressing against the end of your shoe?”

Sigh. “Why don’t you tell me these things?”

I was surprised the shoe was even containing his foot – that’s how much the toe was pressing into the mesh of the tennis shoe.

So, it’s off to find shoes after all. But, at least it’s only one pair!

My silly children...HAD to go outside Saturday. They were pinging off the walls. So, since the biting prairie winds had finally died down, I told them to go run around outside and let activity keep them warm.

But, just to show you how warm they did need to stay, this was the thinnest piece of ice they found out in the yard. We are still living in the South, right? 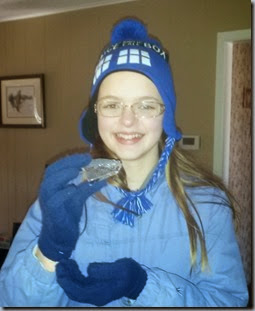 Thoughts from the kitchen...As we worked on menu planning recently, I was reminded of last year’s favorite soup: Beef, Mushroom, and Tortellini Soup. The original recipe did not have the beef – it had meet-filled tortellini instead. But, we adjusted it a bit, using cheese-filled tortellini and thin beef strips. I really thought I had published the recipe last year, but I guess I never did. Here’s the original: http://www.bhg.com/recipe/mushroom-and-beef-ravioli-soup/

Anyway, I decided it just had to go on this month’s menu plan. Today was the day, and it was oh so good!

Meanwhile, my friend Karlyn told me about a meal planning site she’s trying out: http://www.plantoeat.com/   I can’t wait to give it a try for next month!

On my bookshelf...my current fiction read is Beyond All Dreams by Elizabeth Camden.

In the mornings I’m reading 100 Bible Verses Everyone Should Know by Heart by Robert J. Morgan. He has several chapters of introductory material, followed by a list of the 100 verses and a little explanation of why each one is important. A lot of it is ideas and thoughts I know, but I am really enjoying reading his perspective. It’s motivating me on my journey back to active Scripture memory.

I’m also about to start Answering Your Kids’ Toughest Questions by Elyse Fitzpatrick and Jessica Thompson as my non-quiet time nonfiction read. One of those review books I forgot about.

Projects...the little by little reorganization project I mentioned; re-establishing the habit of sorting through and organizing digital pictures at least once a week; knitting a few more dish cloths (knit or crocheted clothes are my favorite kind!) while Doug reads Lord of the Rings to the family; determining what sewing project I want to tackle first this year and establishing at least an hour or two of sewing time each week, even if it’s in very small bursts.

Sounds of the moment...music playing – everything’s pretty quiet right now as the kids head to the shower.

From Hibbard Academy...anticipation. Excitement. An even greater love for the elementary science textbooks from Dr. Jay Wile. Why? Because this experiment, so delightfully demonstrated by the awesome Mythbusters, is coming up soon for Steven.

It’s still a couple of weeks away, and we have several fun experiments between now and then, but that doesn’t dampen Steven’s excitement at all. Or the girls’ for that matter. They won’t miss this one!

Of course, that’s part of what I love the most about Dr. Wile’s science, whether it’s elementary or high school. The experiments really are fun and pretty easy. The kids have so much fun doing them together!

A favorite thing from last week...On Friday evening as my friend Joanna and I enjoyed a Skype chat, we began discussing the balance between maintaining a schedule and being flexible enough to enjoy some spontaneous fun. Then on Saturday I got a text from my friend Jennifer asking if Steven and I wanted to have some spontaneous fun with her and Read. Think maybe God’s trying to teach me something? So, we went. And we had a great time hanging out with Jennifer and Read.

The planner...Doug has a meeting tomorrow at the Baptist Building, so we’re going to tag along. School/work in a different environment is always fun! Then we’ll run some errands and go eat somewhere fun for Doug’s birthday. Other than that, it’s a pretty normal week.

Because visuals are fun...We’re reading Lord of the Rings as a family. Although Steven has been very aware of the characters for quite some time, he’s a newcomer to the story. It’s been fun watching him incorporate it into his play and even the names of his newest stuffies.

Recently he came in saying, “Look! I have Anduril!” Pretty good-looking sword, in my opinion! 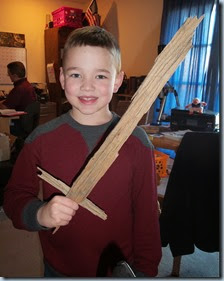