Well, from time to time this year, I (Doug) am going to pop over and write a post here at the Hibbard Family. Why?
It is supposed to be the Hibbard Family, not “Ann has to do all the writing.” Even though she’s the one who handles all the cool stuff in the family, I’ll offer the occasional moment or recipe. Just for fun.
Today, we’re going to tackle Monday’s lunch. It was Mushroom and Tortellini Soup with Beef. This is a recipe that started life as “Mushroom and Beef Ravioli Soup.” There have been some modifications across the years.

While I know some people pick grocery stores based on political views, we shop based on two factors: price and existence in a 20 mile radius. That gives us a Walmart, a Kroger, and a Mayflower. Typically due to cost, we end up at Walmart.

I’m certain homemade beef stock would ramp up the awesome. I just don’t have the time…or cow bones to make it.
(Yes, it’s fuzzy. It’s not because I’m unwilling to endorse Swanson as a brand. I don’t quite know what I did.)
Also, use stock and not broth if at all possible.

2. Cheese-filled tortellini (12 oz pkg, dry). We went with the shelf-stable dry pasta. Again, if you only go to the store every so often, you take what you can get. This is also good with the fresh ravioli in the produce section. Or the fresh tortellini over there as well.
3. Vegetation: I used about half-dozen mushrooms, diced up, and one-half of four bell peppers. I like to use all the colors, just for pretty purposes. I can’t taste a difference, but you might notice one.

4. About a half pound of beef. This is typically a “whatever beef is 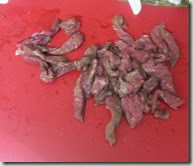 cheap this week” meal, or a “whatever is in the freezer but undesignated for future plans.” Cut it into bite size pieces. Thinner gives one taste/texture, thicker another.
(No, I did not cut that meat with the little paring knife that you see. I have a nice, large chef’s knife.)
5. Water. I used 2 cartons of water. Cartons? Yes, I filled the beef stock carton twice and added it in.

1. Pour the stock and two cartons of water in the sauce pot. Turn it up and get it boiling. I’m on a flat-top electric range, so high power.
2. Turn on the electric skillet to its highest setting. 400 for this one.
3. Slice your beef the way you want it. Salt it and set it aside, get your veggie cutting board, and dice up mushrooms and peppers.
4. Pour a little olive oil in the hot skillet, and then put the beef in quickly. Give it a slight stir fry and get the edges starting to caramelize, and then add the pepper/mushroom mix. Give those a nice mix in, and come back and stir them from time to time to make sure nothing sticks.
5. When it looks like the meat is mostly done, turn the skillet down. I went to 250.
6. By now, hopefully, your stock is boiling. Put the pasta in the boiling stock and let it cook about 5 minutes. (Alternately, you can cook it completely here and then mix later.)
7. After that five minutes, carefully add the stock and pasta into the electric skillet. Let it simmer until the pasta is done, and you’re ready to eat! 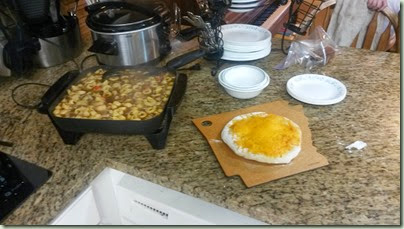 Oh, the bread? Artisan Bread in Five Minutes a Day is our go-to bread book. That’s a basic white dough from it, rolled out and cooked in our Samsung Smart Oven—which is a handy countertop microwave and convection oven. I put cheddar cheese and garlic salt on it.Then I put it on our Arkansas cutting board.
So, that’s about it. This fed all five of us one meal, and there’s enough soup left for another meal. It’s in the freezer. There was not enough bread.
Email Post
Labels: The Hibbard Kitchen

Herding Grasshoppers said…
Sounds good to me! If you had leftovers, there MIGHT be enough to fill up my family. (Three teenage boys... y'know?) ;D