Skip to main content
Labels
Posted by The Hibbard Family May 17, 2010

I've mentioned how much the kids love to see C-130's fly over when we're in Little Rock.  Well, Doug and I have thought several times that we needed to take the kids up to LRAFB in Jacksonville to see the C-130 on display at the base entrance.  We just never seemed to get around to it.

Then, the Friday we saw Alli off, we walked outside the airport and up a sidewalk to see if we could spot a few planes taking off and landing.  As we walked out, we noticed a C-130 flying nearby.  The more we watched it, the more it seemed that it was descending.  Surprisingly, it seemed to be coming in for a landing right in front of us!  We were incredibly excited, but the excitement only grew as we watched it touch the ground and speed right back up to take off once again.  It was practicing a touch-and-go!  (FYI: A C-130 is a cargo aircraft, and a touch-and-go is when the plane literally barely touches the ground while releasing cargo, personnel, and/or equipment and then immediately takes off again.)  That definitely made for a thrilling end to our morning visit to the airport.

And, it spurred us to make a stop in Jacksonville a priority for the day. 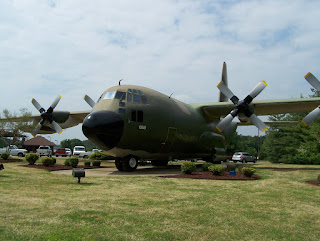 The kids listened as Doug pointed out various aspects of the plane and told them some history on this particular plane. 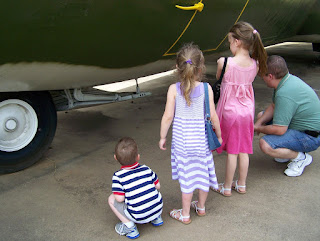 The plane on display at LRAFB was the last C-130 out of Vietnam and also the last flight to help evacuate Vietnamese who had helped the Americans in the war.  One of the refugees on that flight is said to actually live in Jacksonville! 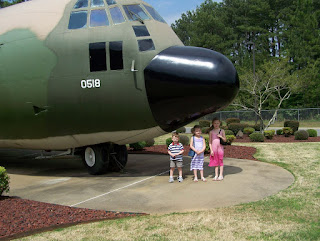 Laurie Skillern said…
I live near the base and they fly overhead all the time. Back on 9/11 when all flights were grounded it was really eerie not having those C-130's fly overhead.
May 18, 2010 at 9:50 AM

And how great that you got to see one flying and doing the touch-and-go.