Skip to main content
Labels
Posted by The Hibbard Family May 24, 2010

Doug and I need change now and then. We both know people who have never moved other than when they got married. They have never rearranged their house. Nothing ever changes - and they like it that way. That is so incredibly foreign to us! Even growing up, I remember getting to the point that I needed a change. A rearranging of something. My bedroom. My school setup. Something. College was the same way. And, Doug and I both moved a lot, so that contributed to the reality of being accustomed to change.  Doug and I recently counted up how many times we've moved in our lifetime, and it's been a lot - the average was once every one and a half to two years. It's just in our blood to have change. (God knew what He was doing when He put us together, didn't He?)

One of the easiest ways to find change is a home rearrangement. While some people shudder at the thought, Doug and I find it immensely enjoyable! We were going to do it for date night, but just really didn't feel well. So, we put it off until Saturday. We still didn't feel well and didn't have much energy, but the rearranging was almost like therapy for us.

The focus rooms for this go-around were the living room and study (the fourth bedroom where the kids' toys are kept).

The biggest change was removing the entertainment center from the living room. Woo-hoo! I so prefer having the tv out of the main living room! 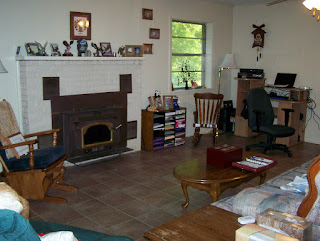 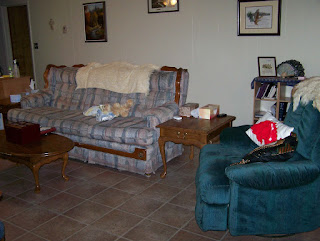 It's a more open and peaceful arrangement, we think.  We really like it.

And, here's the study...we finally hung the curtains I made nearly three months ago.  Yay! 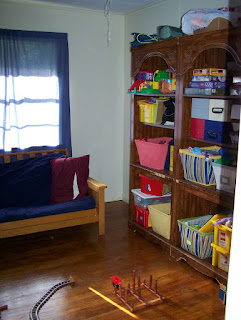 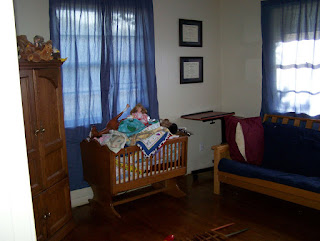 We moved my glider out of here and into the living room, and we moved our games into the library (which will be the next rearrangement project when the bug strikes again).  We like it a lot!  Such a peaceful room!

And, Steven broke it in immediately by building what I think is an airport on the floor... 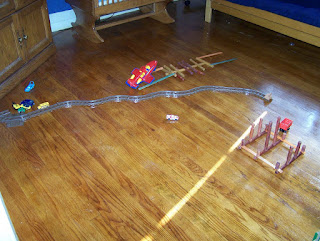 I'm with you. I love moving furniture, changing rooms around, etc.

I'm like that, too. If it were up to me, this house would be different each time I walked in. lol My husband is a creature of habit.. we've only rearranged the living room once in the FIVE YEARS we've lived here. You'd have lost it by now, right? lol
May 24, 2010 at 3:14 PM

The Hibbard Family said…
Julie - you nailed it! Fresh and new is exactly what I'm after!

Alli said…
I can't go without change either! When I got an apartment, I think I rearranged my room about 2 times since I was there for a year- my roommate never rearranged ONCE! & when I suggested rearranging the living room she didn't understand why. :( But alas, I'll have my own place next semester & can rearrange it monthly if I want. :)
May 26, 2010 at 2:45 AM

Stephanie Kay said…
I love to rearrange furniture! Joel hates it. So it works out well for him that our house is too small to do any rearranging.
May 27, 2010 at 5:27 PM