Do you have a place that is just a haven for you?  That place that feels peaceful even in the middle of chaos?  I think Arkadelphia is that place for us.  Specifically our alma mater, Ouachita (pronounced Washita, for you non-Arkies) Baptist University, but the town in general, too.

So, last Friday as we were trying to decide where to take Steven’s birthday pictures, Doug suggested heading to OBU for our photo shoot.  And who was I to argue with such a brilliant suggestion?

We started with lunch at the Honeycomb.  Click on the link for details about the restaurant – it’s a neat place!  I worked there for a little over a year, starting my senior year of college.  The location where I worked burned down a couple of years ago, and they relocated across the street.  So, as we walked into the new restaurant, it was completely different.  New location, new people, new ways of doing things.  But, at the same time there were so many memories.  And the bread was just as wonderful as I remembered it!  After lunch we went across the street to the Beehive thrift store, owned by the same parent company, and then we headed to campus.

Thanks to the rain, the outdoor temperatures were bearable instead of suffocating, so we got to wander outside a bit. 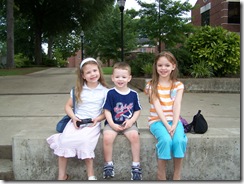 We took Steven’s birthday pictures, and then browsed inside for a little while.  We stopped in to see Tim Harrell, one of Doug’s former roommates who is now Activities Director on campus.  He handed each of the kids some new OBU gear, which was delightfully received. 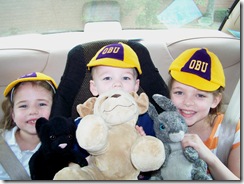 Even Susanna, Harvey, and Bunny are ready to become Tigers! 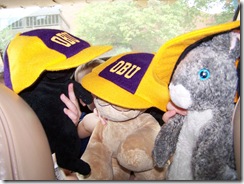 We went from there to crash in on Tim’s wife Nancy, a former suite-mate of mine and dorm mom in one of the nice new student village dorms that all of us old timers are drooling over!  I took in my camera and didn’t take a single picture until we were walking out the door…I just had too much fun visiting!  Such a precious time visiting with her and meeting her their sweet boys!

The kids loved playing with little Henry, and it was so precious to see them holding hands as we walked out to the car. 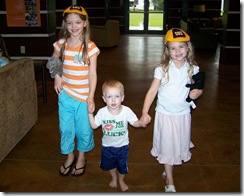 It was one of those days that God knew we needed – just a day to refill and refresh.  And for that, we were so thankful.

Stephanie Kay said…
Arkadelphia will always hold a special place in my heart. I lived there 3 years as my parents attended OBU and then 4 years when I attended OBU. Except for my current home (7.5 years) that's the longest I lived in one town my whole life!