I honestly cannot believe my “baby” is four!  This year we’ve said goodbye to our toddler and hello to our preschooler.  He’s so big! 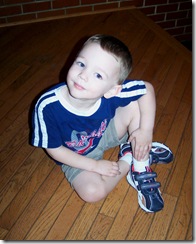 It’s hard to even process all of the changes we’ve seen in Steven this year.   He has learned to do chores like making his bed and emptying the trash.  And, he’s actually become a true help instead of a distracting comic relief during chore time. 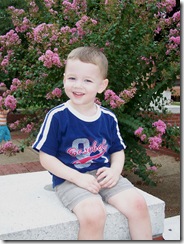 He can now dress himself, which makes for some interesting outfits some days.  His favorite?  Gym pants of various colors and a favorite t-shirt with bright green crocs or bold red flip-flops, unless we tell him he needs to wear tennis shoes.  Usually the colors are all there, but fashionable matching of those colors just isn’t quite a skill he’s grasped yet. 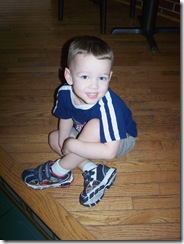 Physically he’s growing by leaps and bounds.  Our growth chart shows three and a half inches of growth in the last year.  Those cute little hams we love to “get” now have no baby fat left – they are solid muscle.  A few weeks ago we found a pair of Lightening McQueen tennis shoes, size 12, on sale, so we bought them to put them away for the fall.  Last weekend when we tried to put on his old tennis shoes, we realized fall was too far away!  So, he got to wear his awesome new shoes for his birthday pictures. 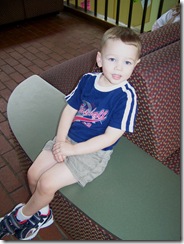 The growth of his mind has been phenomenal to see as well.  One day early this year he decided he was ready for school.  I have worked with him some, but it seems as if one day he just suddenly knew his numbers.  Then his letters.  And he’s been working on his writing, too.  Something tells me kindergarten will be starting for this kid before we celebrate his fifth birthday. 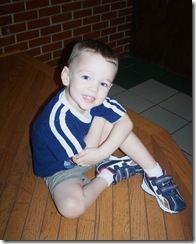 Some things haven’t really changed – only grown.  Like his personality.   He is full of energy, and he puts that energy into most  of what he does.  Well, at least what he does that is in line with what he wants to do!  He’s still a kid who greatly prefers to do things of his own choosing! 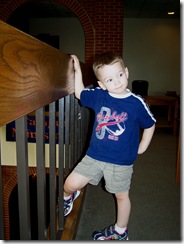 This little goofball makes us laugh continually with the little things he says in his matter of fact way.  Oh, and the faces he makes.  And the sounds he comes up with.  And his creativity.  And his phraseology.  And his imagination. 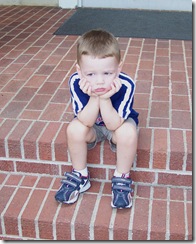 (And just in case you don’t believe that he’s a little mess, just check out the next picture…the pout and folded arms are very intentional, and there is a grin behind them just waiting to explode into laughter.  This was a pose of his choosing.) 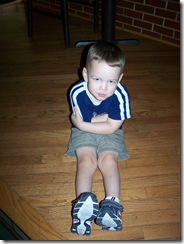 (And this is what came next!) 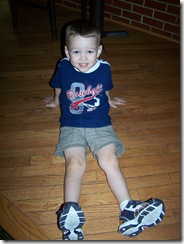 And then there are the things that haven’t changed at all.  He’s still a mama’s boy.  He still needs a song at night before he can go to sleep.  Harvey Puppy is more of a friend than ever, so much so that Steven wanted a Harvey cake for his birthday.  And the silkies are still essential.  He still loves trains, cars, airplanes (especially C-130’s), tractors, baseball, football, etc., etc., etc.  He has added Road Runner to his list of favorites in the last year!   He still gives his grandmas a hard time, even though he loves them greatly.  (I must add that Aunt Alli might no longer be on the "give a hard time" list.  Rather miraculous since she has been the greatest recipient of said hard time up to this point!)  He still adores his great-grandma Polly.  He’s now added a new relative to be smitten with – his new cousin Abigail.  Yes, she must’ve hung the moon!  (Hmmm…seems we’re going to have to watch out for this little ladies’ man!) 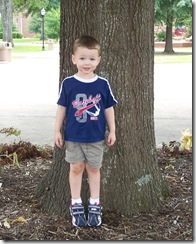 No matter how big he gets, he’ll always be my baby boy.  How thankful we are for this precious blessing, and how fun it is to watch him grow year by year, month by month, and even day by day.
Happy birthday, Steven!  We love you!
Email Post
Labels: Celebrations

He is such a sweet boy! He really is a laugh a minute!! He absolutely brightens my day anytime I have the pleasure of being around him... VBS would not have been complete without those awesome giggles and huge joyful smiles. :) God knew what he was doing when he gave mothers sons.
August 10, 2010 at 8:48 AM

The Hibbard Family said…
Thanks so much, Mandy! He definitely is a precious gift from God. I just can't imagine life without that little sweetheart!
August 10, 2010 at 8:51 AM