And finally, the huge event of the weekend…the Air Show!  As I was looking through the pictures, I realized there was no way it would all fit in one blog post.  Even two is pushing it!  And I’m leaving a LOT out!  So now I take a deep breath and plunge in…

We got to the base entrance bright and early – about 7:30.  The Air Show gates opened at 8:30, but Doug knew what the traffic would look like going in!  The early morning paid off because we got front row parking!  I wish I had taken a picture of our first view walking in – all those planes lined up – and a view of the empty parking lot (and later the full one!).  It was hard to even begin to fathom where to start!  They were still working on some of the setup for the larger planes, so we headed first to check out  the smaller ones.

Remember the Trains! post mention of the Gatling gun?  One of the first planes we saw was the A-10 which was practically built around the Gatling gun!  And what better placement for a Gatling gun in an A-10 than in the mouth of a Razorback!   (This is for any of you who doubt the depth of Hog pride in Arkansas!). 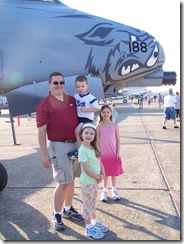 After walking past a few more “small” planes, we headed to the jewel of the Little Rock Air Force Base – the C-130’s.  And yes, we had to walk through every single one! 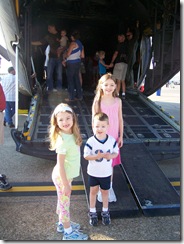 We climbed into the cockpit of the first one.  Everyone sat in what would have been PopPop’s seat (and it’s even likely that he flew in this very plane). 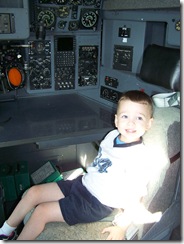 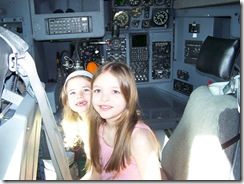 But as cool as it was to sit in the navigator’s seat, Steven couldn’t help but see what it would feel like to be the pilot of such an awesome plane. 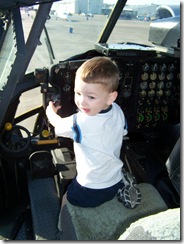 By this time the sun was climbing, it was getting warmer, and we’d been walking around for a good hour and a half.  So, while Doug went off to retrieve the sunscreen, the kids and I found some shade.  We started by going into a sheltered area to check out the Thuderbird plane on display. 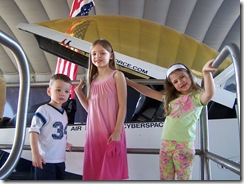 Then we plopped down in the shade of the plane’s shelter for a little rest.  We would spend the rest of the day seeking shade wherever we possibly could. Doug joked that an aerial view of the Air Show would come nowhere near representing an accurate head count because of the massive number of people sitting under the planes seeking shelter from the sun! 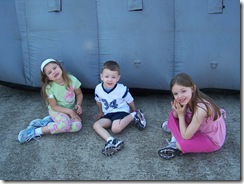 Next we visited the helicopters… 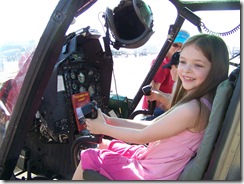 …and a couple of other things before we found shelter under one of the planes on the far end of the display area.  We ate lunch and watched the first part of the show from there.  (This picture is courtesy of the lovely photographer Angela.) 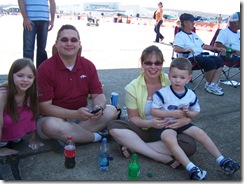 We saw such awesome things as a pilot landing his plane on a truck (yes – this picture was taken as he was touching down on the racks on the truck – it was amazing!)… 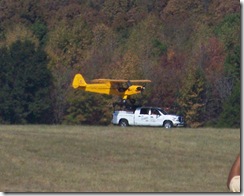 …a pink stunt plane doing some pretty amazing things (painted such in honor of the pilot’s sister, a breast cancer survivor – but Angela didn’t care why it was pink; she was just ecstatic that it was pink!)… 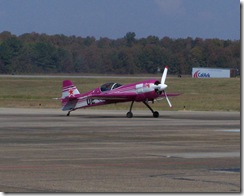 …and crazy Canadians jumping out of a C-130 to pull all sorts of skydiving stunts.  Like this “Candy Cane” 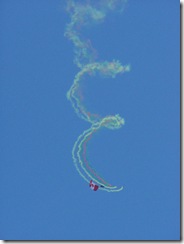 Or flying with legs linked until they were mere yards from the ground. 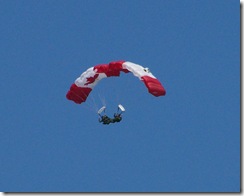 We also saw a reenactment of the attack on Pearl Harbor and several other plane demonstrations, including the rare sight of a World War 2 P-51  and a modern-day A-10 flying side by side.  Phenomenal!

Then came a lull in the action, so we decided to go meander a bit more.  We took a potty break, saw a couple of planes we hadn’t seen earlier, and found new shade for the rest of the show.