Those of you who have been following this blog or our lives for a while know that God has been amazing when it has come to provision of clothes for our children.  Other than various forms of underwear, we almost never have to make clothing purchases for our children.  And when we do, He always provides the money, or the material and patterns, in some unusual way.

This year was no exception.  Monday and Tuesday I sorted through fall clothes for the kids.  The provision once again just overwhelmed me.  I hope we never get used to it!  I never want to take it for granted!

Working on Steven’s clothes on Monday was nice, peaceful, and productive.  Sorting through the girls’ clothes Tuesday, on the other hand, was quite the adventure!  Olivia decided to be the star of an opera, so she sang in a loud operatic voice practically all afternoon!!  Hilarious and exhausting all rolled up into one, especially considering Olivia doesn’t multi-task well.  She would get caught up in a song or in fits of laughter over her own silliness and forget what she was supposed to be doing!   I can’t help but chuckle even this morning thinking about it.

Meanwhile, there was Angela.  I usually go through Olivia’s clothes first to see what she has outgrown so I can throw it all in a pile to add to Angela’s things.  So, we were in Olivia’s room and Angela’s pile was growing.  She scooped it all up and took it to her room.  Every few minutes she’d come in with a new outfit on.  Typically the outfit itself would match, but she would also have donned a plethora of “accessories.”  She would waltz into the room (to her sister’s singing, of course!), dash up onto a stool, and strike some sort of prissy pose.

This was my favorite… 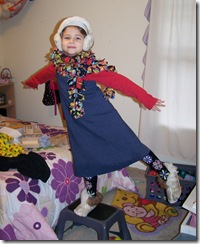 This morning they all just had to wear something newly pulled out.  The girls went Christmas-y with their penguin skirts and hats (which still fit!!  I think God miraculously stretches them every year!).  And Steven – well, I’m just not sure I have the words for Steven’s wardrobe choices.  And no, your eyes are not deceiving you.  Those are knee-high toe socks under camo shorts with a long-sleeve red Thomas shirt.  No words. 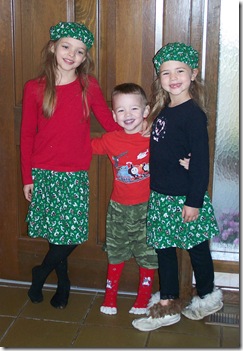 But, the biggest fun of all was a treat for Angela.  One day several years ago we were out somewhere and Angela suddenly went nuts.  She saw something Hello Kitty and began jumping up and down and giggling!  We didn’t know she even knew who Hello Kitty was, but that moment showed us she not only was familiar with the character, but loved the character!  We have greatly restrained any Hello Kitty infusion into our home, but she has collected a few things.

Well, as Olivia and I were going through her things (and before Angela started her model show), we came across a pair of Hello Kitty pajamas.  They were size 10-12, but Olivia declared that she was not going to wear them at all.  Even if Angie couldn’t wear them yet, she was going to pass them over so they could be “new” for her little sister.  (Proud mama moment!)

I was going to just pack them away before Angie saw them, knowing they would swallow her.  But, I didn’t make it.  She saw them.  So, I had her try them on.  Amazingly, they fit in the waist!!  The shirt is big on her, but once I hem up the sleeves and legs (probably five inches each! Yikes!), they will fit her! 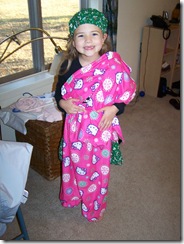 Needless to say, Angela was thrilled, and I was once again marveling at our Provider.  Every year He does something like that – providing not only every single piece of clothing they could possibly need (and in great abundance), but also at least one thing that just fits the personality of each child perfectly.  There’s always one big one - like this year’s Hello Kitty pj’s - for at least one child, and then something for the other two as well.  Can I just say that being the child of the King of kings is downright fun?

I can't say that anyone in this house would get excited over Hello Kitty, but we can identify with God's very specific care for us :D

And btw, you mentioned the deer sausage... is it ground? I love using mine in meatballs. I have a recipe that uses two pounds of hamburger and one pound of sausage... love it. If you're interested, I'll post it.

I think I would be concerned if anyone in your household got excited over Hello Kitty! :-)

The deer sausage is ground and seasoned. And I would LOVE your meatball recipe!
October 23, 2010 at 6:30 PM

Doug Hibbard said…
I still refuse to believe that Hello Kitty is a blessing.