And now for the exciting conclusion…

After we had meandered a bit, we found a lightly populated shady spot under a B-52’s wing.  It was a place where there wasn’t a great deal of direct visibility, so most people were crowded under the plane’s fuselage or under the neighboring plane.  But, for us it was perfect.   We could actually see a great deal of what was going on overhead, and just a few steps in either direction would take us to perfect viewing spots for things happening on the ground.  Those factors combined with the lack of close crowding made for a perfect spot for our family.

While several events that were of less interest to us played out on the runway and in the air, we rested a bit and the kids studied the day’s map and schedule. 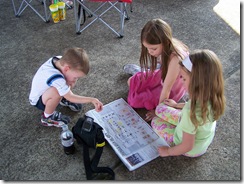 Then came what I still say was, hands down, the highlight of the show.  Yes, even taking into consideration the grand finale with the Thunderbirds.  Ten C-130s lined up to fly in and drop 400 paratroopers right in front of us.

There is no way I could begin to capture on film the thrill of this display.  I can’t even explain why it affected me so, but it was amazing.  We looked out to one side and saw the planes flying in a beautiful line.  As they flew directly overhead, the troops began to jump, two at a time out of both sides of the plane.  Before long the sky was literally filled with men and women dangling from open parachutes.  All of these were volunteers who literally flew in for the show, jumped, and then prepared to fly right back home.  Another group came for Sunday’s show.   This picture doesn’t even begin to show how amazing it was… 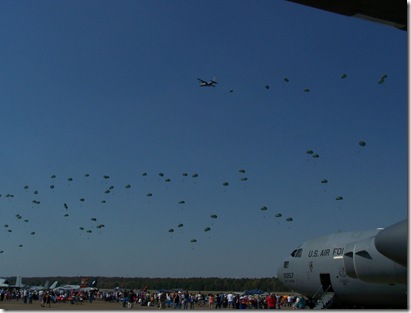 Three injuries from the jump delayed the progression of the show, but from what we were told all three injuries were relatively minor.  While waiting for the runway to be cleared, the C-130’s maintained their amazing line, circling the base until it was time to land. 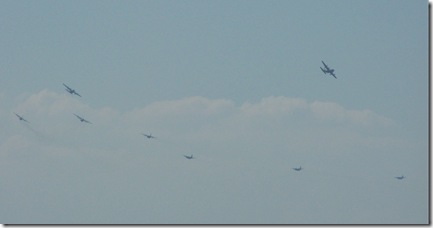 After a few other exciting events, it was time to watch the Thunderbirds.  We decided to head back to the van for this last portion of the show, knowing we’d be practically front and center there, thanks to the awesome parking spot!  We couldn’t see the parade to the planes or much of the takeoff, but we couldn’t really get to a good place to see all of that from inside the gates anyway.  So, we took that time to gather our stuff, get to the van, and grab some water bottles while we waited. 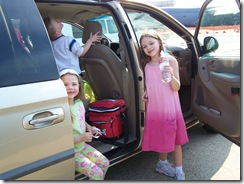 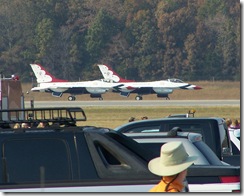 Doug and I got a few shots of the show, but mostly we just watched.  It was my first experience to finally see something I’d heard much about, and I didn’t want to watch it through a camera lens!  But, between us, we did get a couple of good shots.  Here are five of them coming out of a loop – they might as well have been one plane the way they flew so flawlessly together. 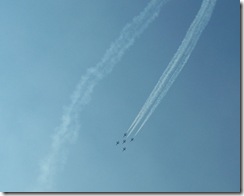 But that was nothing compared to seeing all six of the planes fly together, flip together such that they were all flying upside down, and then rotate back over together – again, as if one plane. 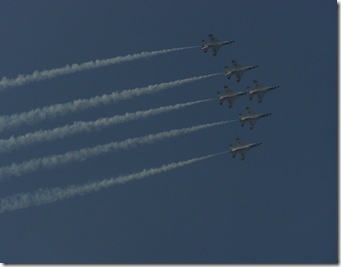 It’s not easy to tell, but those are the cockpits facing us.  Yeah.

As soon as they came in for a landing, we all piled into the van to make our way out and back home.  It took a little while.  After about ten minutes in the car, we weren’t more than two car lengths from our parking spot, but Steven didn’t care! 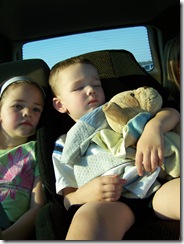 Five minutes later Angie joined him in dream land.  An hour and a half later we were finally off base!  But, it was worth every minute of it.   It was a day we will all be talking about for days, weeks, and probably even months to come!

Though I'm having trouble relating to this "heat" thing you mentioned. We had frost this morning (and an 8am soccer game... *sigh*)