Stop number two for our weekend was the Arkansas Historic Museum in Little Rock.  A man from Jacksonville has an enormous train collection, and he is putting 30 of his 70 sets on display at the museum between now and March.  But, Friday night was special because he was actually going to have some of them running!

Side note: Before we got to the trains, we passed through the room with the historic gun displays.  I thought I had good pictures of our explorations in there, but I don’t.  It was a fun room to explore, though.  The neatest thing was to see a replica of the first Gatling gun.  A quick history lesson of the Gatling gun came in quite handy on Saturday at the Air Show!  More to come on that…

And, back to the trains.

The displays were awesome!   There were all sorts of sets, including a set commemorating the bicentennial anniversary of our nation, the Polar Express, and this Boy Scout commemorative set. 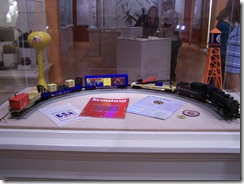 The girls loved this set because it had pastel colored train cars, including pink and purple!  (I have no idea what Angie was going for with that wicked-looking grin!) 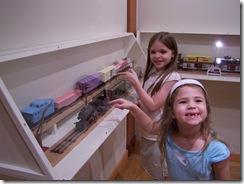 Steven was, I do believe, in complete awe.  He spent the whole evening with this expression on his face… 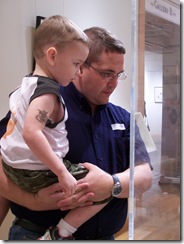 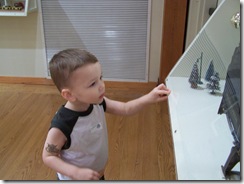 I kept trying to capture a smile, but I think he was too mesmerized to worry about such things as smiling and showing excitement.  He just wanted to study and look and study and look.

The most exciting part, of course, was watching the trains that were set up and going. 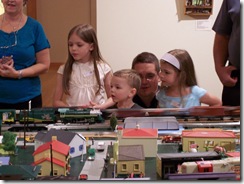 There was even a steam engine that was really putting out smoke!  It’s hard to see it in the picture, but it was there!  I loved that one! 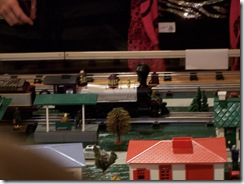 Steven and Angie even got to push the button to make the whistle blow when it was the steam engine’s turn to run. 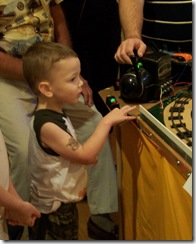 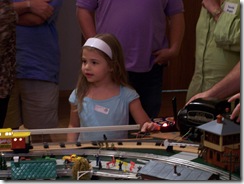 Much fun for a Friday family night, to be sure!