I’m about to make one of those nasty confessions. I don’t like VBS. Yes, go ahead. Gasp. Draw back in horror and disbelief. It’s not that I don’t like the idea of VBS. It’s really not even that I don’t like the practice of it. I just don’t like my involvement in it! I’d love to be the “drop my kids off and go home for a couple of blissful kid-free hours” kind of parent. But, even before I was married or had kids, I just couldn’t stay away during VBS week. Why? Because I know it’s worth the effort, and I just can’t choose not to participate. So, though I dread it every year, I still try to be as joyful of a worker as I possibly can.

In order to increase the chances of that chosen joyful attitude, there are several things I do. I cancel school for the week. I try to work administratively or in kid-interactive situations that allow for breaks instead of two to three straight hours of me being in close proximity to a large group of children. This is important for my sanity, and therefore their safety. I also try to stay out of the heat as much as possible simply because my longevity depends on it!

Well, this week in Almyra we’ve had our version of VBS. We call it Rec Camp. Instead of massive decorations, intense music, and a theme, we have most of our theme wrapped up in what kind of games we’re playing each night. The first night we had old fashioned games. The second night was water night and the third was messy night. Tonight, the fourth night, is family night. Before games started each night, we had the Bible story followed by craft. Each night ended with a snack.

I helped Doug with the Bible story time, and then I managed to secure some of the record-keeping tasks that I so dearly love!!

The kids have had a ton of fun. This is the first year Steven has been willing to go down a water slide because he’s always been afraid of the water in his face. Not this week! This time around he had no hesitations, and was very proud when he got his face wet! Yay! 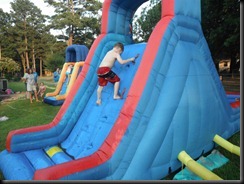 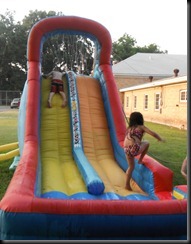 Angie wasn’t too sure about messy night, but she did manage to get messy. Olivia had been looking forward to messy night for weeks! Needless to say, she had no qualms about digging in to the mess. Fortunately, there were plenty of water hoses to clean everyone off before they came in for snack time! 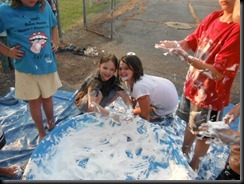 Olivia also started her four day sewing class yesterday, so it’s been a very busy week for her so far! I could tell it had been busy when I found her like this yesterday afternoon. She never takes a nap! (And yes, for the record, that is a children’s dictionary she chose to read. No wonder she fell asleep!) 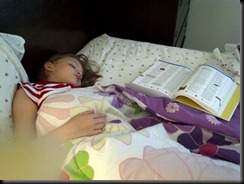 Fortunately it seems that the only casualty of rec camp was Angela. We got home last night and everyone got ready for bed. When Angie came in for 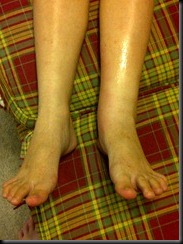 prayer time and I was pulling her up into my lap on the couch, I noticed her left ankle was red. Then I noticed it was quite swollen. I don’t know if you can tell from this picture, but it was almost twice the size of her right ankle! All we can figure is that she got into a bed of ants while she was outside. We got some Claritin in her and went to borrow some “miracle” ointment we knew Rachel had. We moved her mattress into our bedroom just in case she got worse in the night, but 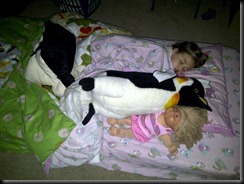 she seemed to sleep just fine! Well, as fine as she could with her bed so covered with stuffies! Through the course of today the swelling has been subsiding, and it looks so much better. It was a little scary last night, though!

So, that’s our week so far. Rec camp ends tonight with family night, and Olivia has two more days of her sewing class. Then we’ll try to have a couple of down days before Doug heads to Memphis for a week of classes. Ah, summer – busy, busy time!

I am so NOT a fan of (my involvement in) large groups of semi-hysterical children. Could have something to do with the way our former church structured their VBS - Very High Energy All The Time.

Thankfully, Wyatt and Tate are both too old and Gunnar has forgotten what it ever was. ;D