Last stop on our whirlwind trip in mid-May was the Vicksburg National Military Park. Doug’s parents drove down with us. We started with the driving tour through the battlefield and then finished at the museum/gift shop. (Typically the tour is done the other way around, but right before we arrived, seven tour and school busses had descended on the park, and all of them were starting at the museum. So, we decided starting with the drive would be wise!) 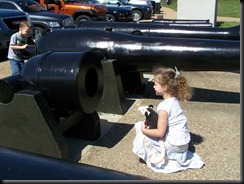 The biggest hit along the trail was the canon. There was a display of different types of canon at the entrance, and then there were more scattered throughout the battlefield in various locations. 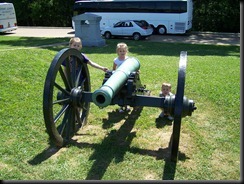 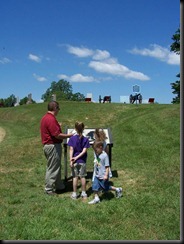 But the most common sight in the park was the monuments built in honor of the soldiers who fought at Vicksburg. Numerous small monuments like these were absolutely everywhere, each represented state honored in nearly every spot they 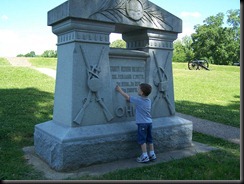 fought. Illinois was probably the most highly represented state. Here Steven is standing in front of one of the Ohio markers. 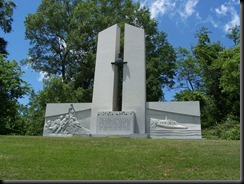 Each state also has a single large monument, like this one honoring Arkansas’ contribution.

A little ways into the drive, we came across this 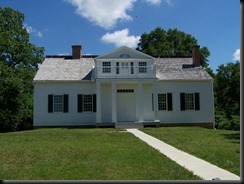 house. It was the only house in the battlefield left standing after all was said and done. The owners were immigrants who stayed loyal to the Union. During the fighting they lived in nearby caves while Union forces dug trenches and fortifications all around the house. 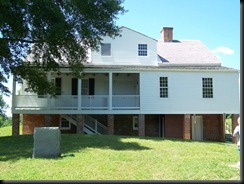 The house sustained heavy damage, was used at one point as a hospital, and was apparently never again inhabited by the owners, although they are buried in the back yard. It is in the process of being restored for tourists.

Next door to the house was the Illinois memorial. I 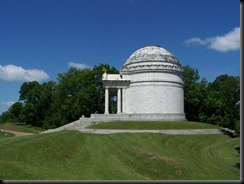 didn’t get a shot from the front for some reason, but the memorial design was based on the design of the Pantheon, complete with the vaulted ceiling and impressive open skylight. 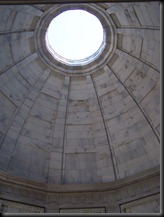 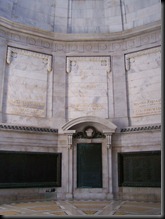 On the walls are large plates with the engraved name of every man who served in the fight for Vicksburg.

Then we came to what I thought was the highlight of 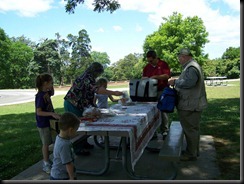 the tour: the USS Cairo. We stopped for a picnic lunch in the shade near the Cairo, and then went for our tour of the ironclad. Sunk in the Yazoo River just north of Vicksburg in 1862 and raised in 1964, it is the only surviving ironclad in existence. Purely fascinating. Even more fascinating was the fact that even though it sunk in a matter of twelve minutes, no lives were lost. 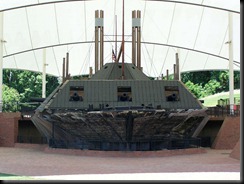 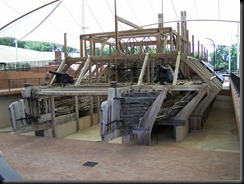 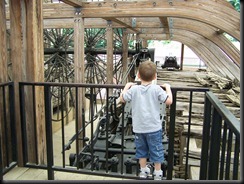 You can see original wood salvaged from the river bottom intermingled with the newer wood used to help in the reconstruction of the ship.

Leaving the Cairo, we proceeded to finish the driving tour along the mostly Confederate side of the line, continuing to see the monuments and markers from the siege. We ended the tour with our stop at the museum/gift store, and then said our good-byes and rounded up our extremely tired children for the drive home, but not before snatching up 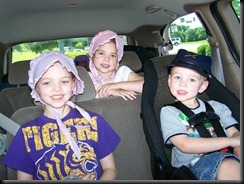 some appropriate headgear as souvenirs. Steven was glad to have a Union cap to go along with his Confederate one so he and his sisters would now be able to dress appropriately for their mock battles!

Choate Family said…
Would you be willing to go back again next year - with friends? Looks like you guys had a blast!
June 4, 2011 at 1:48 AM

Beth said…
Matt and I went to Vicksburg while we were dating--reading this brought back lots of memories! I think we'll have to go back when the Ella is a little older!
June 4, 2011 at 11:05 AM