This has been a great week. I have gotten some major tasks accomplished. I had piles of currently unused Sonlight cores semi-organized in stacks by the window in the school room, but it really just looked like a mess of piles. It all needed to be better organized and boxed up for storage. That was the first major task I accomplished this week. I even did some preliminary plotting for the start of our next core (spring 2012), a necessary portion of figuring out just how to store everything. That was a nice additional project to accomplish, because that lessens the work I have to do when it’s time to order school stuff. YAY!

I also got fall clothes sorted and the “what we need” list created. It’s early, I know, considering we still have forecasts in the upper 80’s and lower 90’s. But, looking at the calendar, I don’t know when I’ll have another chance! Since this was “project” week, I dove right on in. Such fun! Once again, God’s provision is wonderful! We’ll have to buy a few things, but not a whole lot. It makes me smile.

I also got a bunch of “little” things done. Tasks that don’t fall into my normal list of chores but that also pile up and really need to get done. I was very excited to check those things off my master list. Oh, and a day of errands, not counting the trip to Wal-Mart and the library run. Yes, I’d call this a productive week…and I still get a day to write and sort August pictures tomorrow!

But, none of the things I’ve done this week have been super picture-worthy. So, just because I like to include pictures…

This is a project I did a few weeks ago and meant to blog about but never got around to. This is my “round toit” moment!

We had two organizational frustrations that I had been praying 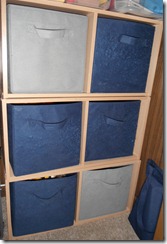 over for a little while. First, Angie’s clothes drawers. Her clothes have been stored in these drawers for quite some time. For the record, these are awesome drawer sets. We bought them at Target over five years ago, and both the cubbies and the fabric drawers have been wonderful! But, at 12” square, Angie just had trouble accessing her clothes. So, I’ve been praying for a different clothing storage solution for her.

Meanwhile, there was the hall toy 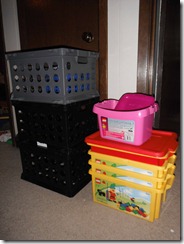 closet issue. The toy sets all fit nicely into crates and  redesignated Lego tubs. The crates and tubs all stacked snugly on top of each other in the bottom half of the hall closet between Steven and Angie’s bedroom. Well, that was the plan, anyway. Stacking is not easy or convenient. Kids have a hard enough time keeping their toys organized when it is easy and convenient. Take those things away, and you’re left with a continual battle. Another organizational dilemma to pray over.

And the answer? A major sale on toy storage units! You know, those wooden frames with colorful cloth drawers? Yep, Doug found two sets on closeout at Wal-Mart and snagged them. I was sooooooo excited! That weekend I dove into a massive rearrange that incorporated Steven’s room, Angie’s room, and the hall closet!

First, I cleaned all of the clothes out of Steven’s dresser and redistributed them to see if they would fit in the cloth drawers of one of the new sets. My entire plan hinged on that being a good fit. Wouldn’t you know, it all fit perfectly! (Leave it to God’s solutions to accomplish that!)

Once we knew it all fit, Steven and I set ourselves to the task of assembling the frame for his new “dresser.” He was a fantastic helper! 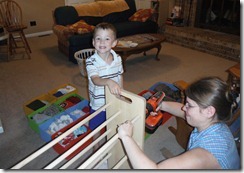 We moved his old dresser out of the way and replaced it with the new one. To say he was thrilled would be a HUGE understatement! Yes, I was a bit concerned about how messy this would look were he to not keep it decently organized, but so far he’s done well with it. It hasn’t all been folded perfectly, but we haven’t had clothes overflowing all over the place. Yay Steven!

Next came Angie’s clothes. We cleaned out her cloth drawers and moved the whole set out of her room. The she and Olivia set themselves to the task of redistributing her clothes into the drawers of the dresser. It makes her room look that much more girly since it’s a “real” dresser. I like that. 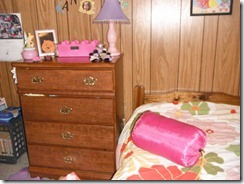 Finally, we came to the task of the hall closet. I pulled out all of 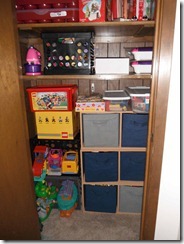 the toys and redistributed as many sets as would fit into the cloth drawers. I put a few things on top of the drawers, turned two crates on their sides to make “shelves” for the big Little People accessories, and put the storage buckets for the special Lego set instructions on top of those shelves. Some of the girls’ things were able to stay on the lowest built-in shelf. Everything is nice and accessible, and no stacking is required.

But, there were still three sets that didn’t have a place: Duplos (which my kids still haven’t outgrown – and I like to have around for when babies and toddlers are visiting), Lincoln Logs, and Little People.

The solution? The as yet unused second toy storage set! Steven had a couple of crates in his closet storing some of the toys that stay in his room. Some of those we just moved over, but others we emptied out. We redistributed those toys to the top row of drawers in the new storage set and used the remaining three rows for the remaining three toy sets – which fit perfectly, of course! And, naturally, the storage unit fit wonderfully on one side of his closet. 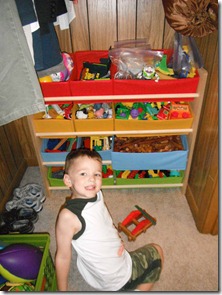 And after several weeks, the new system has been fantastic! And fall/winter clothes are going to be a great fit into the new dresser system, too.

Just for the record, I love, love, love productive project weeks and successful reorganization projects. Both make me smile!