Everyone is dragging this week. It set in sometime while we were sleeping Saturday night and has just not let up. Maybe it’s the humidity, which is pretty heavy-duty right now. The temperatures aren’t bad, but the humidity is just thick. I grew up in a desert, and even after nearly 18 years back in Arkansas, I still haven’t gotten used to the humidity.

But, despite the dragginess, we’ve still had a good few days. Here are a few snapshots of our fun.

We don’t have cable or satellite, and we don’t usually miss it. Except when it comes to sports. It’s now football season and we kind of miss getting to actually watch the Razorbacks play. It is fun to listen to them on the radio, though. Every Saturday the kids dress appropriately… 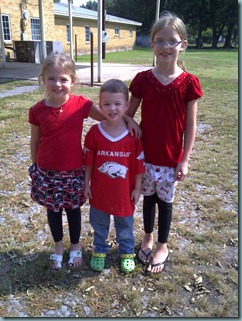 This past Saturday, though, the game was on an internet channel we had access to. So, we set up a picnic on the floor of our bedroom and we all watched the first half of the game on the computer. There was much excitement and there were many shouts of “Woo Pig Souieeeee!!” during our fun picnic. 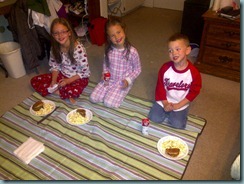 I shared Olivia’s picture on Monday, but here are a couple of Angie & Steven:

A southern belle on the “grand staircase” at Alicia Jo’s on Monday. She looked so elegant gliding her way up and down the stairs! 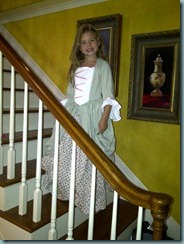 This child would live in this helmet if he could! He even tried to sleep in it in the car yesterday while we were out running errands. I think Angie made a good birthday present choice! 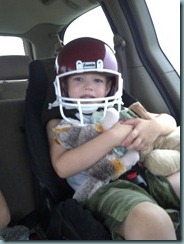 Herding Grasshoppers said…
I love all the pics!

Did Olivia just shoot up a few inches? She's looking so tall!

The Hibbard Family said…
She DID shoot up! The month after we made sure all her fall clothes fit well. In the two weeks after this picture was taken, Steven and Angela followed suit. AUGH!!!
October 10, 2011 at 7:30 AM