Skip to main content
Posted by The Hibbard Family July 24, 2010

Sometimes, there are little things that delight us.  They shouldn’t be that big of a deal, but they’re fun – and we enjoy the events.  Thursday night’s little visitor was one such event.

I pulled into the carport that night after being out with a friend.  As I pulled in, I saw movement in our big outdoor trash can illuminated by the van’s headlights.  Out popped a little nose, followed by a furry body with a long tail.   It was a young possum, and it perched up on the edge of the trash can and froze, staring into the headlights.   The kids have stuffed possums, and seeing this one reminded me of just how real the stuffed ones really do look! 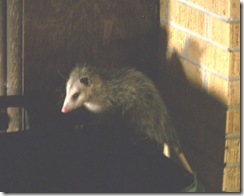 I stayed in the van and told Doug about the possum over the phone.  He joked about getting his gun, but instead came to the door with the camera and got the first picture from inside the house, trying to keep the flash off and not scare the possum away before he could get pictures for the kids. 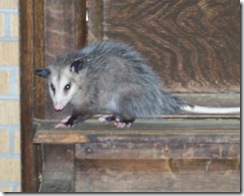 The possum then moved over onto the old piano (a previous resident’s leftovers) that sits in our carport.  Doug came out and was able to get a couple more pictures while the possum just stared at him.

The kids, of course, were delighted with the pictures the next morning!  PopPop jokes often about feeding them possum meat, and he and Grandma are the ones responsible for the stuffed possums hanging upside down from a pet net in Steven’s room.  It’s quite the joke among the Hibbard clan.  I had seen this young possum waddling around outside the fence in the backyard a couple of times, but this was the first time I’d seen him this close to the house.  We just had to get the pictures for the kids.

Of course, we weren’t very nice – we made sure the lid was on the trash can so that our little guest won’t become a frequent visitor to our carport!