Nearly a year ago, we made a visit to the AR Post Museum with the intention of returning another time to visit the nearby park area.  It took us a year, but we finally made a return trip.

Saturday, July 3, the park celebrated 50 years as a national park.   Doug had heard on the radio that there would be a celebration, cake, demonstrations of live from the mid-1800’s, and even a canon!  So, we loaded up that Saturday morning and headed Gillette for the festivities.

After a couple of brief speeches, there was cake ready for all in the museum there on the grounds (not the same one we visited before).  True to nature, though, the kids were almost more excited about touring the museum than about eating cake!  So, we perused the displays while the crowd around the cake table thinned. 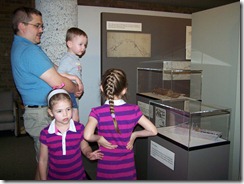 The life-size picture of an alligator was a thrill! 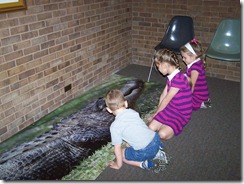 After cake we headed outside.  A folk band was playing a concert, so we decided to listen while walking around the park and waiting for the demonstrations to begin at noon.   The girls were clapping to the music and reading history all at the same time. 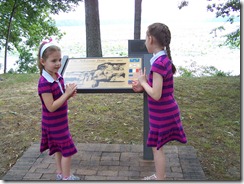 The canon was exciting, too! 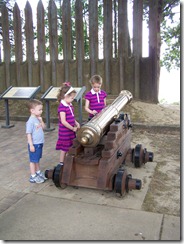 We followed the trail around to read about the town that existed here for a few years before the Civil War brought about its economic collapse.  For two of those years, Post was the capital of the territory before being moved to Little Rock. 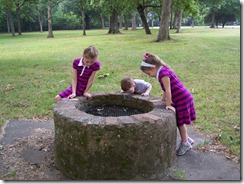 Steven and Olivia were excited to run the trails… 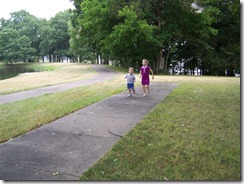 …while Angela wanted to read every word of history she could find!  When she was walking, she quickly moved on ahead of everyone else, but when she stopped to read there was no moving her until she’d read every word. 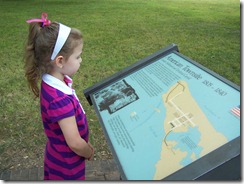 We found quite a few huge old trees – it was fascinating to imagine them living through the history we could only read about! 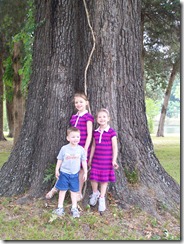 The day and the trail were both gorgeous!  It was warm, but the cloud cover and perfect breeze made it a perfect summer day to tour the park. 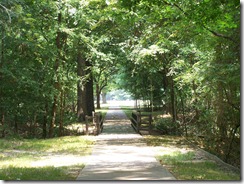 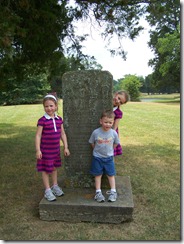 Even so, it helped to have a little break during the walk, sitting on benches… 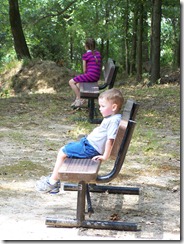 …looking out over the AR River. 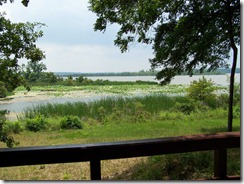 After about an hour of browsing, we could tell the concert had ended and the other activities were in full swing back near the museum.  So, we walked back over there for the last part of our visit.  Stay tuned for those pictures…