For the record, it’s almost impossible to find C-130’s for kids to play with. Naturally, because Doug’s father was a C-130 navigator, our family thinks they are the most beautiful planes in existence. But, how many other kids really prefer a cargo plane over more exciting fighters and bombers? Apparently enough that if a C-130 toy shows up in a store, it doesn’t stay on the shelf long at all! We’ve found and put together models and puzzles, and Steven has two large stuffed C-130’s that Doug’s mom made for Doug when he was a boy. Once upon a time, long before we had a little boy, Doug saw an army man set at Hobby Lobby, and it had a C-130 in it. But, by the time it dawned on us that we might want to have that set, the only source for them was on e-Bay at extraordinary cost.

Sooooo, imagine my surprise when I was at my friend Rachel’s house and saw this! (Although it’s not strictly labeled as a C-130, the beluga whale nose is so unique to C-130’s that there was no doubt as to the true identity of this cargo plane!) 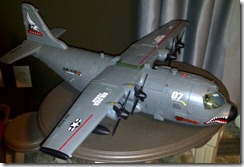 I asked Rachel where the plan came from, and they said Toys R Us. So, we went shopping. No luck. When we asked about the planes, we were told they sold out as fast as they came in. We put ourselves on a list to be informed when Toys R Us had online stock available, and then we determined we’d just stop by the physical store whenever we were in town.

So, last Monday, Doug was in Little Rock and stopped by. No planes. But, then Tuesday morning I got a phone call from Rachel. They were in Toys R Us and there was one plane left! A small supply had just come in that morning, and they grabbed the last one for us!

To say that the kids were excited was a HUGE understatement! While the girls finished school work Wednesday morning, Steven and I put the plane together so he would have a chance to play with it before naptime. 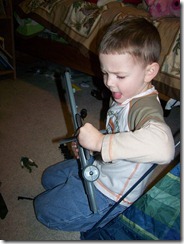 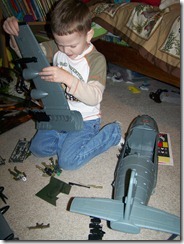 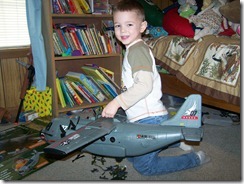 Then the girls got ahold of it after they finished their school work, and Steven joined them after his nap. 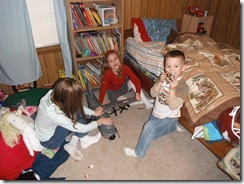 The Toys R Us plane is a slightly “enhanced” version and is armed rather than just being a cargo plane. But, the kids don’t care. They’re just excited to have one to play with! So far, everything from army men to a dollhouse family to any stuffy that will fit has been flown in the C-130. It soars around the house carrying out its various missions. Oh, and Doug discovered pretty quickly that Bunny could be easily hidden inside. It took Olivia a little while to figure out exactly where Bunny had run off to!